Go hear them roar!: Lions’ roar echoes at capital zoo after over a decade

Go hear them roar!: Lions’ roar echoes at capital zoo after over a decade

Kaavan to get a female compan­ion soon too, says CDA offici­al .
By Our Correspondent
Published: May 30, 2016
Tweet Email 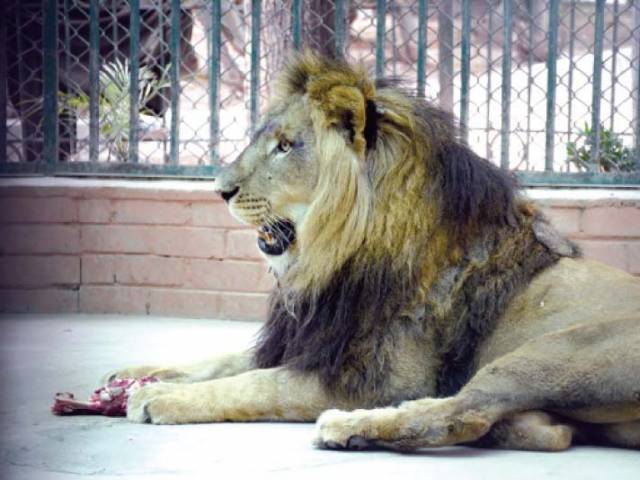 The lions have been brought from Lahore Safari Park under exchange of birds and animals program. PHOTO: EXPRESS

ISLAMABAD: A pair of African lions, latest addition to the Islamabad Zoo — Sunday came as something of a surprise to visitors.

After a long break of nearly 11 years, the Marghazar Zoo located at the foothills of the Margallas echoed with lions roar.

Since then efforts were made to bring lions to the zoo but never succeeded.

Both, the lion and the lioness, brought to the zoo are four-and-a-half-year old.

In exchange, Aman said, the CDA had given a pair of male zebras and two male barking deer.

He said that the CDA’s negotiations with the Sri Lankan government regarding provision of a female elephant were in the final stages, and soon the animal would also be added to the zoo.

The 22 years old female elephant, named Saheli, died in 2012 after she contracted an infection in one of her legs that, due to alleged negligence of the animal keepers spread, affecting her whole body, and resulted in her death.

Since then, the sole male elephant, Kaavan, is alone in his enclosure at the zoo.

The lions, which are yet to be named, were brought from Lahore Safari Park on Saturday night under the supervision of a team of veterinary doctors and associated zoo staff.

The CDA has announced initiation of a social media campaign, and residents have been asked to suggest names for the newly-brought lions.