Uniden­tified US offici­als have been named in an FIR lodged at Noshki Police Statio­n by Azam's brothe­r Muhamm­ad Qasim
By Mohammad Zafar
Published: May 29, 2016
Tweet Email 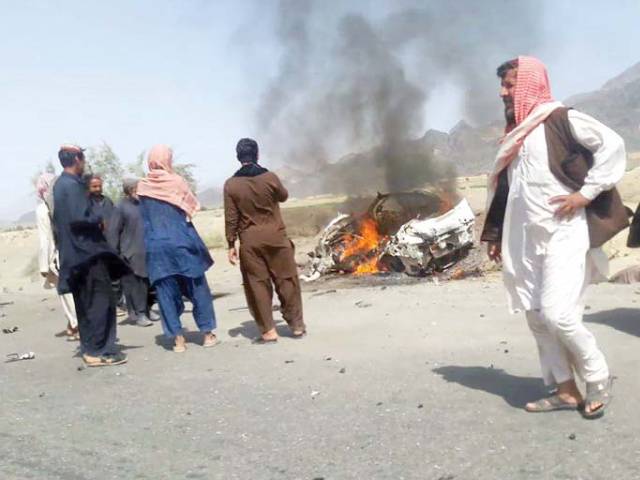 People gather around a destroyed vehicle in which Mullah Akhtar Mansour was travelling on May 21, 2016. PHOTO: AFP

QUETTA: Relatives of a taxi driver, who was killed in the US drone strike targeting Afghan Taliban leader Mullah Akhtar Mansour last week in Balochistan’s Noshki district, have registered a case against US officials for the killing.

“I seek justice in this case. Legal action should be taken against all those US officials responsible for killing my innocent brother in a drone strike near Noshki,” read a statement in the FIR lodged by brother of the deceased Muhammad Azam at Noshki police station.

The applicant, Muhammad Qasim, upheld his brother was not only an innocent citizen but also the sole breadwinner of his five-member family who drove a taxi for his living.

K-P Assembly stands united in condemnation of US drone strike

Azam and Mansour were killed in a US drone strike on May 21 in a remote area near the Pakistan-Afghanistan border.

The mission, which US officials said was authorised by President Barack Obama, included multiple drones.

Following the strike, US Secretary of State John Kerry said leaders of both Pakistan and Afghanistan were notified of the air strike but he declined to elaborate on the timing of the notifications, which he said included a telephone call from him to Prime Minister Nawaz Sharif.

Reacting to the development, Pakistan termed the US drone strike inside the country’s territory a violation of its sovereignty as well as principles of the United Nations Charter governing the conduct of states.