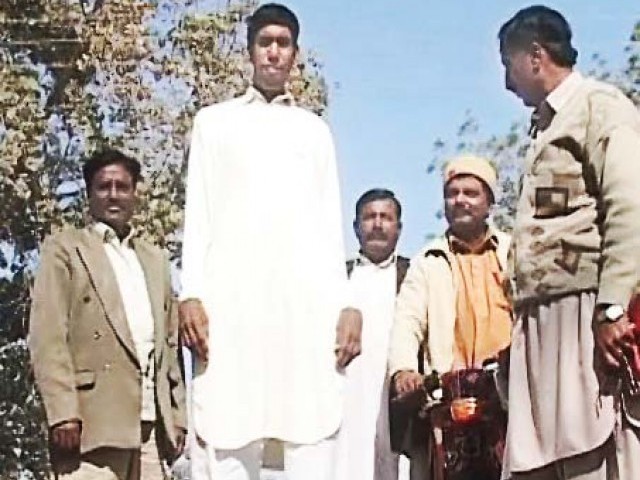 Tamiwali resident 17-year-old Huq Nawaz’s is well-known throughout the district and that is because he is seven feet nine inches tall.

Locals in Khairpur Tamiwala often gather around Nawaz’s house to take pictures with him and he is popular among children in his street. “I was 15 when my height crossed seven feet and people began to look at me differently,” Nawaz said, adding that over the past year his height had increased rapidly, causing his health to deteriorate. “He has been suffering from muscular and joint pains for years now but recently it has gotten much worse,” said Nawaz’s uncle Safdar Hussain. Nawaz is the sole bread winner for his family ever since his father died.

“I have four sisters and my mother living with me. All our money goes towards paying my medical bills,” Nawaz told reporters. Nawaz belongs to a poor family and after the death of his father, survival has become difficult.

Doctors at the Bahawalpur DHQ hospital have said that he is severely malnourished and has developed a bone disorder. “It doesn’t often seem like it because he is so tall but the boy is severely underweight for his height. This has caused his bones to curve inwards,” said DHQ Hospital Dr Mubarak. “Nawaz has been coming in for regular check ups since last year but he now says that he cannot afford the treatment any longer,” he said. Dr Mubarak added that Nawaz’s condition was bound to get worse if he doesn’t get his medicine.

“Everyone in the area knows Nawaz and he is a kind boy. All the neighbourhood children tend to stop by at his house to play cricket with him,” said his neighbour Shireen, adding, “People also stop him in the street to take pictures with him. He is always extremely nice about it.”

The bones of Nawaz’s hands and feet have begun twisting in over the last year. “He used to enjoy playing with the children in the street but now he is always in too much pain,” said his sister Mahnoor.

“A few years ago he got a citizenship offer in Germany but we refused to leave our home. Now we have no money to even keep him healthy,” said Nawaz’s uncle Safdar Hassan.

Nawaz’s family has asked the chief minister for medical aid. The family has also appealed for assistance in securing employment for the 17-year-old.

“I never really did well in school and I dropped out early because I began to be teased about my height,” Nawaz said, adding “Now I can’t find a job and support my family but I am trying to make the best of it.”