Accord­ing to report­s, Misbah, Younus, Fawad Alam and Shan Masood have been outsta­nding in fitnes­s drills so far
By Sports Desk
Published: May 19, 2016
Tweet Email 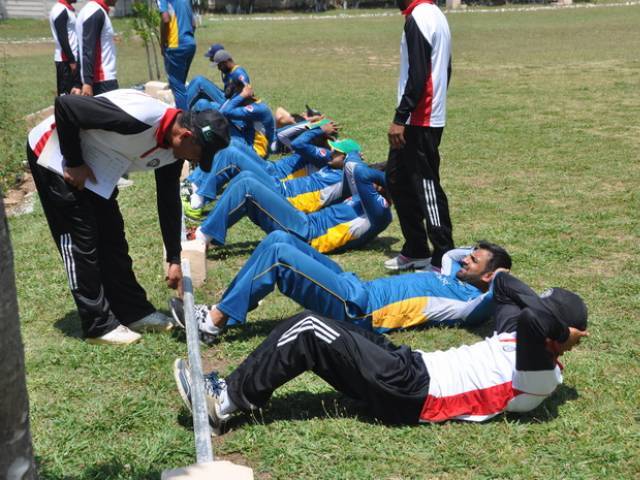 More than half of the 31 players attending Pakistan Cricket Board’s (PCB) boot camp at the Kakul Military Academy have failed their fitness tests, Press Trust of India reported on Wednesday.

According to reports from the camp, four players who have been outstanding in the fitness drills so far are Test captain Misbahul Haq, senior batsman Younus Khan, Fawad Alam and Shan Masood.

“Misbah, Younus, Shan and Fawad have maintained a consistent standard,” a source said on condition of anonymity.

Army steps in to prep Pakistan cricketers for on-field battles

“However, what is of concern is that apart from a few players, rest have failed to impress the military trainers, fielding coaches, and fitness trainer Grant Ludan,” he added.

According to the source, after initial camp results, the trainers have now devised a new plan for other players which means they would now have to wake up at 7 am and do the drills till noon.

‘Gains’ of the Kakul boot camp

The board has maintained that fitness would be crucial measure on deciding the touring squad for upcoming England series. “The PCB has made it very clear that fitness will be a key element when deciding on the touring squad for England,” the source said. “One reason for the decline in team’s performance in limited-overs format has been greatly attributed to low level of fitness among players.”

We are not producing quality cricketers, says Afridi

However, Mohammad Hafeez, Haris Sohail, Zulfiqar Babar and Imad Wasim were all ruled out of the boot camp before it began due to fitness issues, whereas Yasir Shah missed the opening day of camp citing pain in his left knee.