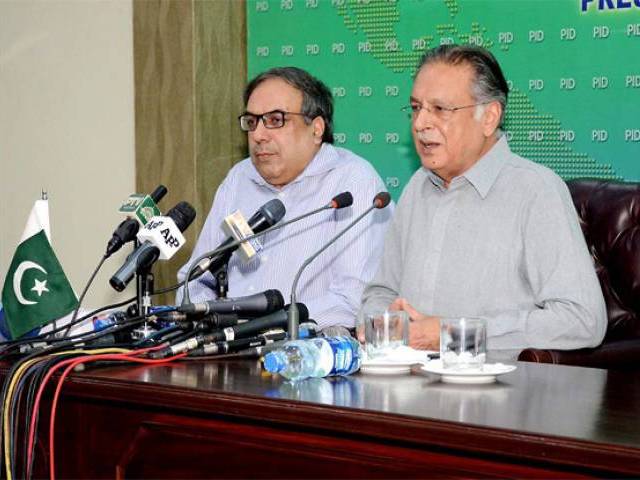 ISLAMABAD: Imran Khan’s admission that he once owned an offshore company provided the much needed ammunition to the government which had been left scratching its head in the wake of the chief justice’s refusal to form a ‘toothless’ judicial commission to investigate revelations in the Panama Papers that dozens of Pakistanis were among hundreds of world politicians, businessmen and sport and showbiz celebrities who owned secret offshore holdings.

Information Minister Senator Pervaiz Rashid came out all guns blazing on Saturday, bombarding the Pakistan Tehreek-e-Insaf chairman with blistering questions. The PTI put up an aggressive defence offering its leaders who allegedly have offshore holdings for accountability.

“The PTI tops the list of Pakistan’s political parties having offshore companies as six of its senior leaders have offshore holdings,” Rashid said at a news conference in Islamabad. He added that Imran owns an offshore company since 1983, while a PPP member set up a similar company 10 years later. “The PML-Q also has one offshore company, but none of PML-N’s MPs or ministers or even the prime minister has an offshore company.”

However, Rashid singled out Imran for his criticism. “The PTI chief is ‘Baba Adam’ (pioneer) offshore companies. He concealed truth and promoted falsehood,” he said. “It’s strange that he remembers the runs made and wickets taken during 1983, but forgets the offshore company he had set up that year.”

The minister questioned why did Imran conceal facts about his offshore company, such as why it was set up, its business deals, tax payment and the property bought through it? Why Imran had not disclosed his offshore company or source of income in his declaration of assets, he asked. “Imran will have to answer all these questions before parliament and the proposed judicial commission.”

Referring to Imran, Rashid said the person who had triggered a debate on the Panama Papers has been exposed. “Morally, Imran has now no right to continue politics as he has turned out to be the pioneer of setting up offshore companies,” he added.

Speaking to journalists in London on Friday, the PTI chairman admitted that he had formed an offshore company over 30 years ago so that he could dodge British taxes for purchasing a flat in London.

Not answerable to opposition on Panama Papers, says PM Nawaz

Imran repeatedly mentioned three reasons for setting up offshore firms in his tweets, speeches and press conferences namely tax evasion, hiding black money and money laundering, Rashid said. “But now he [Imran] has fallen in a ditch he dug for the others.”

The political grouping, meanwhile, sought to justify its chairman’s offshore company. “Imran Khan had formed the offshore company keeping in view the high rate of taxes in the UK, but it has been dormant for years,” PTI Information Secretary Naeemul Haq told a news conference. He insisted Imran’s assets were well known but no one had any clue about those of Prime Minister Nawaz Sharif.

Bu when asked about Imran’s current source of income, Haq had nothing to say except mentioning the PTI chairman’s visit to India during the T20 World Cup this year. “The income from the tour was sufficient for him till date.”

Responding to another allegation, he challenged the government to start probes against those six PTI politicians it thought had offshore companies at the earliest. “The PTI is ready for accountability,” he added.

Haq also warned of street agitation, protests and marches if the government did not change its attitude. “Former chief justice Iftikhar Muhammad Chaudhry has also called on Premier Nawaz Sharif to step down,” he said.

Imran is scheduled to return to Pakistan on Monday to attend the ongoing session of the National Assembly where the prime minister is supposed to answer questions raised by the opposition, but PTI sources did not confirm if their leader would attend the session.

PML-N to consult opposition on ToRs