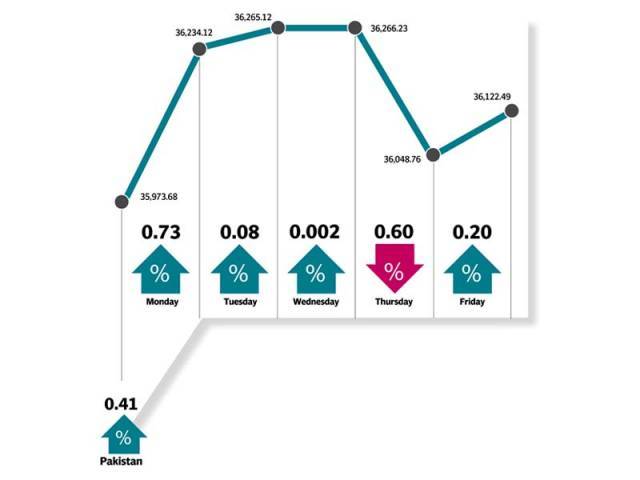 KARACHI: With anticipation building up, the index breached its all-time high closing early in the week and reached the 36,235-point level.

However, the rest of the week saw subdued excitement with the market even closing negative on Thursday. The benchmark index gained 0.4% over the week to close at 36,122 as profit-taking kicked in across most sectors.

The major highlight of the week was successful completion of the eleventh review by the International Monetary Fund (IMF) for the second last tranche of the Extended Fund Facility (EFF). Discussions with the IMF staff mainly pertained to the upcoming budget with an emphasis on fiscal consolidation and GDP growth.

Significant gains were recorded in Fauji Meat Limited with a cumulative volume of 2500 shares, contributing 140 points to the index. On the other hand, Habib Bank Limited  (-3.9%) succumbed to profit taking during the week after gaining a sizable +5.35% in previous week, dragging the index down by 94 points.

The energy sector remained in the limelight during the week. A consortium led by Pakistan GasPort won the contract for the second LNG terminal after submitting the lowest bid of $0.42/mmbtu for a capacity of 600mmcfd.

Data on remittances showed that inflows continued to remain strong, increasing by 5% year-on-year in 10MFY16. On the other hand, total liquid foreign exchange reserves remained flat week-on-week, despite $128 million increase in the holdings of State Bank of Pakistan to $16.1 billion, inching closer to the June end target of $17 billion.

On the macro side, the latest trade data indicated that the deficit increased by 17.7% month-on-month due to significant growth in import bills and a slight decline in exports.

While the T-bill auction held this week fetched bids of Rs464 billion against target of Rs200 billion, the government borrowed Rs229 billion, with majority of the funds borrowed in 3M T-bill reflecting expectations of bottoming out of the interest rate cycle.

Foreigners were net sellers of $12.7 million worth of shares in the outgoing week. Net selling worth $3.3 million was seen in cement sector, while net buying of $1.8 million was see in the oil & gas marketing sector.

Earlier called Latif Jute Mills Limited, the company is one of the industrial machinery and services firms in Karachi.