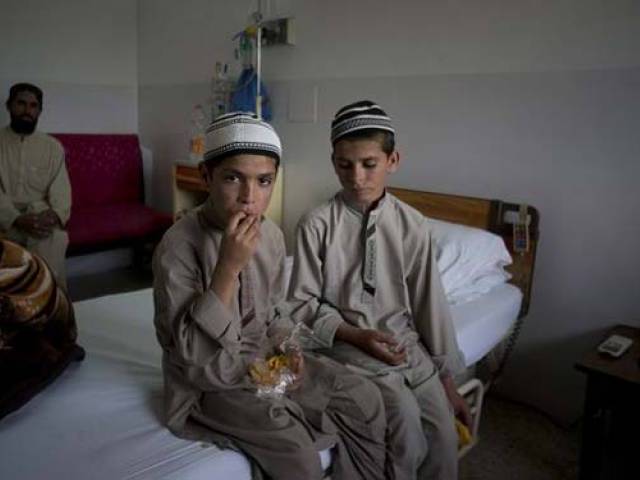 ISLAMABAD: The ‘solar children’ from Balochistan have become active at night after undergoing a short but intensive treatment regimen at the Pakistan Institute of Medical Sciences (PIMS).

The boys, nicknamed ‘solar children’ because of an uncommon ailment which caused them to temporarily become paralysed at night, have been under treatment at the hospital for two weeks.

“We have sent their blood samples to the University of Maryland, USA. We will need further time diagnose the genetic profile of the disease,” Shaheed Zulfiqar Medical University (SZABMU) Vice Chancellor Dr Javed Akram, who is also chairman of the medical board constituted to diagnose and treat the solar children, told the Express Tribune.

He said that during the day, they are given low dose of medication, with a full dose after sunset. Since starting the cycle, they have begun to be alert after dark.  He said they are living now leading normal lives and spent their time playing. “It is big medical success and honour for the country” he said, but added that they were waiting for test reports from the University of Maryland, which would help diagnose and prepare a genetic profile of the disease.

Last month, the case of three siblings — Illyas, 1, Shoaib 13, and Abdul Rasheed, 9— was reported from the Mian Ghundi area, 15 kilometres from Quetta as the first of its kind.

The president directed health authorities to ensure the boys get the best possible medical care. The CADD minister briefed the president was briefed on the children’s condition and details of their treatment at PIMS.

Hussain also chatted with the boys and gave them gifts while wishing them a speedy and full recovery.

Hussain noted with satisfaction that doctors at PIMS were doing their best to treat the boys and suggested consulting foreign advised that medical institutions in the developed countries should also be consulted to come up with concrete findings about the disease.