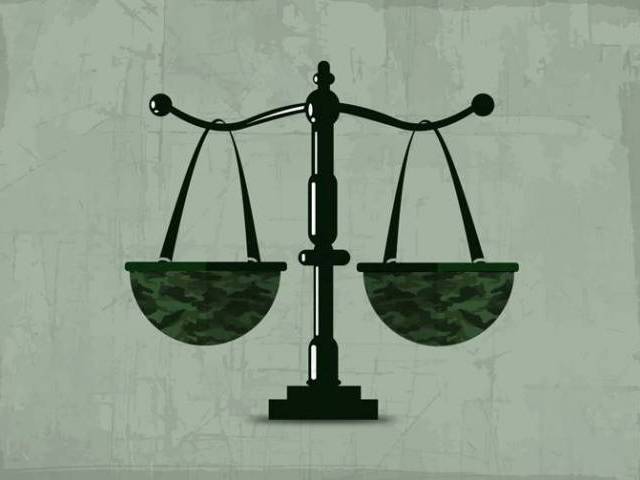 Fateh Khan, Fazal Ghaffar and Tajir Gul had been convicted of carrying our terror attacks in the country by military courts. CREATIVE: AAMIR KHAN

ISLAMABAD: The top court on Tuesday stayed execution of three terror convicts condemned to death by a military court.

A three-judge bench of the Supreme Court of Pakistan, headed by Justice Amir Hani Muslim, issued notices to attorney general of Pakistan and JAG branch as it adjourned the hearing of the case for an indefinite period.

Fateh Khan, Fazal Ghaffar and Tajir Gul had been convicted of carrying our terror attacks in the country by military courts.

However, during the proceedings their counsel argued before the apex court that all the accused were not provided an opportunity to have a fair trial.

“They were not provided with a lawyer to defend themselves and were not even informed about the allegations against them.”

After listening to the arguments of the accused’s counsel the top court ordered to suspend the execution of the alleged suspects and sought their complete trial record from the military courts.

This is not the first time the Supreme Court has stayed executions of terror suspects convicted by the military courts.

In February, the apex court had stayed execution of four terrorists, including two facilitators of the December 2014 carnage at Peshawar’s Army Public School (APS), condemned to death by military courts.

The convicts had challenged the military court decision in the Peshawar High Court (PHC) which upheld their conviction on 9 December 2015. Subsequently, the convicts challenged the PHC ruling in the Supreme Court.

Earlier, another two-judge bench of the apex court, headed by Justice Gulzar Ahmad, had suspended on 7 December, 2015 a military court ruling in which Qari Zahir Gul and Haider Ali had been convicted of terrorist acts and condemned to death. The matter was also referred to the chief justice with a recommendation for constitution of a larger bench.