Whippe­d by desert sands for over 300 years, the Gori jo Mandar or Temple of Gori stands alone and abando­ned...
By Aakash Santorai
Published: February 2, 2011
Tweet Email 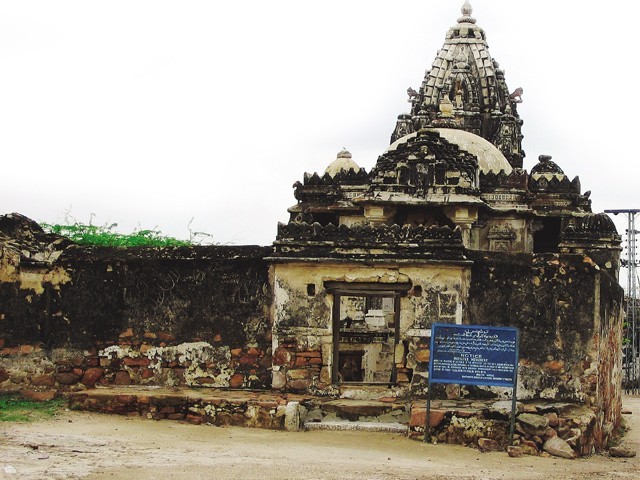 Whipped by desert sands for over 300 years, the Gori jo Mandar or Temple of Gori stands alone and abandoned in Tharparkar, a relic of a time and a culture long forgotten. No supplicant lights a candle to dispel the darkness, no devdasi (female devotee) perfumes the corridors with fragrant sticks, and the lilting melodies of sacred songs are no longer heard in this desolation. Only the screeching cries of bats echo in this once-glorious shrine.

Situated between Islamkot and Nangarparkar, Gori jo Mandar is shrouded in mystery. Even its original name is lost in antiquity, having changed many times in the course of the centuries. With no written history of the temple having survived, the only story as to its origin is a legend that it was built by Goricho, a Jain worshiper, in 300 AD.

This legend is supported by historian Raichand Rathore, who, in his book Old Tharparkar, writes that this temple was built by Goricho, a saint of the Jain religion and follower of Mahavira (599-527 BC). Built with intricately carved stones, the building has 52 steeples and several small rooms, some of which can accommodate only one solitary worshipper.

While the purpose of the temple was undoubtedly religious, politics may have played part in its downfall. “The British military destroyed some parts of this temple because they found out that conspiracies against British rule were being hatched here,” writes Rathore.

Gori jo Mandar makes an immediate impression on those intrepid visitors willing to travel to this lonely spot. Constructed at the zenith of Jain culture in Sindh, it is entirely constructed from marble, probably brought in from Gujrat. According to Professor Altaf Aseem, former head of department of Archeology at Khairpur’s Shah Abdul Latif University, the main architectural feature of this temple was its 54 beautifully built domes, which no longer exist.

To Professor Aseem, the domes indicate that there was no idol worship in the temple and that “the Gori temple was probably owned by Shevtambar devotees.” Shevtambar is a sect of Jainism whose followers do not believe in the worship of the physical forms of deities. Rather, they believe that it is the characteristics and virtues of the deities that should be emulated. In an interesting example of how cultures blend into and borrow from one another, the style of the dome was adopted from Muslim architecture purely for its acoustics and suitability to the area’s climate.

Gori jo Mandir was also a place of learning; the wide corridors of the building served to accommodate the many students that came to eat, pray and learn in these halls. At the heart of the temple is a circular hall around which are small rooms, supposedly once used to accommodate students. Some historians even claim that Rabindranath Tagore himself was inspired by this place to create the university town of Santiniketan, situated between Mithi and Islamkot.

The long-awaited rains do not just bring a touch of green to the otherwise barren Thar desert, they also bring tourists. For the 2,000 inhabitants of a nearby village both the rain and the visitors are a lifeline.  “Every year we celebrate the fourteenth night of Bado [the sixth month of the Hindu calendar] at this temple and after that no one goes there,” says Kheenro Bheel, a local villager. “I have never seen anyone from the government come here to survey the site or help restore the building,” the 70-year-old added.

The west side of the temple is destroyed, and there is no one to rebuild it. The villagers who live nearby are too poor to eat even two square meals a day and have no idea of the significance of the place. Even if they did, such a monumental task is beyond their meager resources. “The archeological authorities are least concerned about this unique symbol of architecture and history,” laments local journalist Khatao Jani.

Dotting the landscape of Thar’s Karoonjhar hills are fifty other temples, reminders of a time this area was not a forgotten backwater, but a thriving cultural center. Among these relics of the past is the magnificent Bhodesar temple, which is built on a high platform and reached by a series of steps carved into the rock.

Huge stone slabs constitute grand columns carved with objects of Jain worship. These stone carvings display a high level of expertise and dedication, carved as they were at the apex of Jain culture.

But despite this grand past, this temple is no longer visited by any worshippers and lacks even a single caretaker. The steady silence and loneliness of this place is only broken by the cawing of crows during the day and the screeching of bats by night. The bell of the temple is rusted and columns of ants march through cracks in the damaged walls.

At the center of Nangarparkar city stands another Jain temple; this too is damaged and its walls are crumbling. Five centuries old, its faded wall paintings depict the local flora and fauna. Jains made offerings of water, sandalwood, flowers, incense, oil, rice and fruits over here. The Veeravah temple is also an architectural landmark of Thar, comprising of both cylindrical or conical and dome architecture. All this ancient Sindhi cultural and historical heritage is in a terrible state of ruin and  the only sign of the government’s presence is a solitary sign asking visitors not to damage the buildings.  Despite this sign, not a single temple is whole and complete — and it is obvious that not all of the damage has been caused by the elements.

Tharparkar has many ancient buildings, temples and mosques and the Bhodesar mosque is situated alongside the temples in the lap of Karoonjhar hills. “After conquering the temple of Somnath Sultan Mahmood Ghaznavi stopped in Thar on his way to Ghazni in 1026,” writes renowned archeologist Ishtiaq Ahmed Ansari, in his book Forts of Sindh. Bhodesar was one of the ancient cities of Sindh, along with Pari Nagar, Veera Wah, Kasbo, Kerti and Amar Kot. Five years ago when the road from Islamkot to Nangarparkar was built, miniatures of Buddha were found during the digging of that site and these are now kept at Umerkot museum.

Situated near the temple, Kasbo village is also a picnic site. Here, peacocks and peahens — along with the songs of local legend Yousif Faqeer  — make the atmosphere pleasant. No one who comes here should miss the stirring melodies of this blind folk singer.

But as the rainy season passes, both the elusive greenery and the visitors also disappear, and the temples of Tharparkar resume their silent vigil, waiting for a spring that may never come.