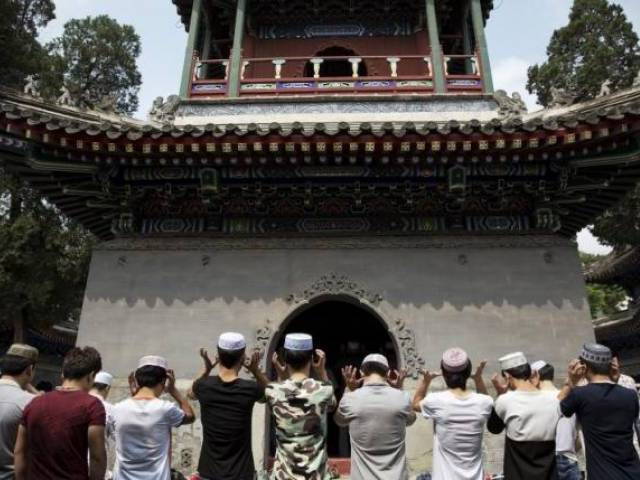 Muslim believers pray at the historic Niujie mosque as they celebrate the Eid al-Fitr in Beijing July 18, 2015. PHOTO: REUTERS

China has lodged a diplomatic protest with the United States after a US government commission said Chinese violations of religious freedom last year remained “severe”, the Foreign Ministry said on Thursday.

The US Commission on International Religious Freedom, a bipartisan US federal government body, said in a report this week that there were “systematic, egregious and ongoing abuses” in China against Christians, Buddhists, Muslims and others.

“China is resolutely opposed to this and has already lodged stern representations with the US side,” he told a daily news briefing.

“We demand the US side objectively and justly view China’s religious policy and Chinese citizens’ freedom of belief and stop using the religious issue to interfere in China’s internal affairs,” Hong added.

“The US side should reflect more on its own problems and not always gesticulate about other countries.”

The report urged the US Department of State to re-designate China’s government as a top-tier violator, along with eight other countries, including Myanmar, Iran, North Korea and Saudi Arabia.

China has long said that it guarantees religious freedom. However, critics note that the officially atheist ruling Community Party recognises only a handful of state-approved religions – Islam, Buddhism, Taoism, Catholicism and Protestantism – followers of which must worship under the watch of patriotic religious associations.

The government describes resistance to its rule in Muslim and Buddhist communities as inspired by outside forces trying to split the country, and regularly cracks down on unregistered religious groups and underground house churches.