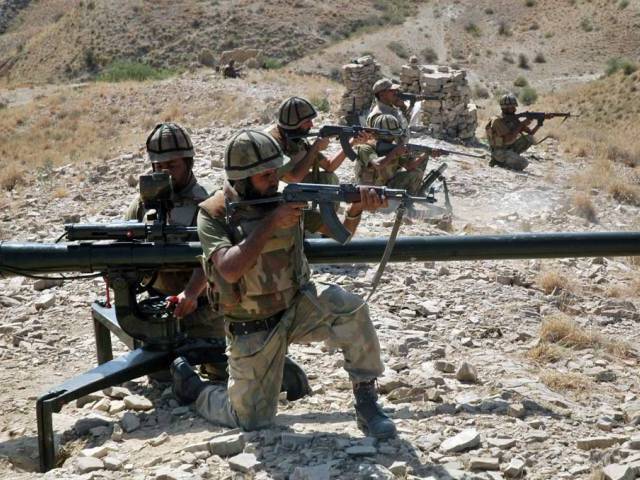 Pakistan’s top military commanders approved a ‘comprehensive plan’ on Monday for carrying out combing operations against sleeper cells and hideouts of terrorists across the country.

The plan was given the nod of approval at a corps commanders’ conference, presided over by army chief General Raheel Sharif at the GHQ in Rawalpindi, according to a statement issued by the Inter Services Public Relations (ISPR).

Under the strategy, the army-led combing operations will be conducted in ‘no-go areas’ across the country, particularly in south Punjab, which was considered a stronghold of deadly militant and sectarian groups.

A security official told The Express Tribune that the combing operations will be conducted jointly by army troops, intelligence operatives as well as personnel of police and other law enforcement agencies.

Law enforcers, led by the army, can raid any area to take out terror suspects and their sleeper cells, the official added while requesting anonymity.

The military’s media wing said that while carrying out combing operations to pre-empt potential sleeper cells and hideouts of terrorists, the plan simultaneously will enhance the reach of local and provincial law enforcement agencies.

The corps commanders were also briefed in detail about internal and external security situation of the country. “Participants of the conference dwelt at length on operational preparedness, training and other professional matters,” the ISPR statement said.

The army chief, while lauding the successful completion of Shawal operation, paid rich tribute to the sacrifices of the troops of army, Frontier Corps and Rangers who, according to him, were valiantly fighting the war against terrorism to make Pakistan a safer place.

On April 18, the last phase of ground operation in North Waziristan Agency was completed after fleeing terrorists were driven out of the strategic Shawal Valley.

The treacherous terrain of Shawal was the last bastion of local and foreign militants, who had for years used the region not only to move between Pakistan and Afghanistan but also as a springboard to mount attacks on both sides of the border.

Hundreds of militants had reportedly retreated to the deeply forested ravines to avoid the massive military operation the army had launched in June 2014 in North Waziristan Agency.

Security officials said the successful Shawal operation would enable military authorities to focus shift to the urban centres, where terrorists still have a support base.

PM asks rivals to ‘wait until 2018 or even beyond’