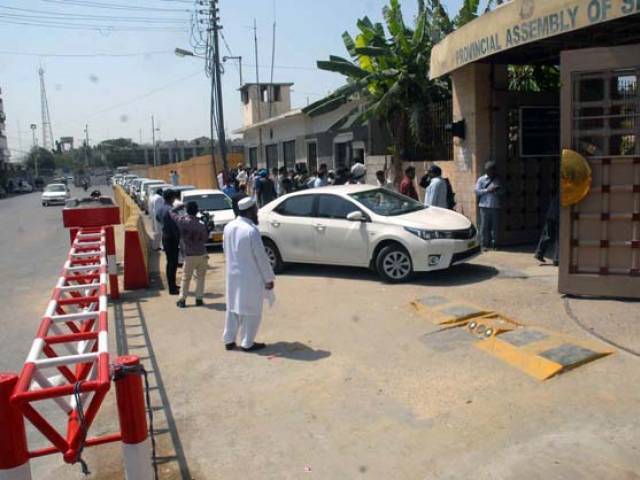 Strict security measures on Monday compelled several MPAs to leave their vehicles at the main gate and walk to the Sindh Assembly.

Security officials barred the entry of MPAs who had no gate pass for their vehicles. Finance minister Murad Ali Shah preferred to return to his office rather than attend the session when officials of the Special Branch stopped his vehicle at the entrance for not having a gate pass.

A number of vehicles were seen lined up in front of the assembly building.

The heightened security measures were put in place following a ‘sting operation’ by a television anchor last week to expose lax security at the Sindh Assembly by bringing a live weapon into the House.

Once the session began, education and parliamentary affairs minister Nisar Ahmed Khuhro, addressing Speaker Agha Siraj Durrani, said, “Many lawmakers have suffered mental agony in the name of security today. Officials not only stopped members of this House but exceeded their mandate by checking each and everything the MPAs and ministers possessed in their vehicles and checked their personal bags too.”

He clarified that MPAs are not against security arrangements, but urged the speaker to “please direct them not to infuriate members.”

Opposition leader Khawaja Izharul Hasan, whose vehicle was stopped at the main gate, endorsed Khuhro’s remarks, saying “I had to walk to the session as I had no gate pass.”

“Please don’t punish all journalists and MPAs because of a mistake committed by one person,” he said while talking to journalists outside the assembly.

Interestingly, it was Hasan who had backed the anchorperson after his ‘exposé’ on April 29, questioning the ‘billions spent on the assembly’s security’.

During the session, officials of the Special Branch were also asking journalists to show their identity cards, and disallowed media members to take their vehicles inside the assembly premises.

The speaker said security has been tightened because of the “James Bond” who staged a drama inside the assembly in a bid to show security lapses. He explained that he had not issued assembly passes to the anchorperson and his colleague who possessed the pistol. “We have ordered an inquiry into the matter and will present a report soon,” he said, adding that the assembly secretariat is making arrangements so lawmakers do not have to face such situations.

“I am thankful to reporters covering the assembly for depicting the real picture behind the anchor’s drama as we have always respected journalists and don’t bother them while they are entering the premises,” he said.

The speaker also warned MPAs who do not attend the session and asked parliamentary party leaders to submit their leave applications; otherwise action would be taken against them.  “Some members remain in absentia for five years,” he said, adding that they would be disqualified.

Pakistan Muslim League (PML)-Functional MPA Sheharyar Mahar and PML-Nawaz MPA Ameer Hyder Shah Sherazi submitted an adjournment motion against MPAs Sharjeel Inam Memon and Owais Muzaffar alias Tappi for their continued absence in the House. “Both these members have not attended the sessions for the last several months; we request the House to please take action against them,” the adjournment motion read.

Muttahida Qaumi Movement (MQM) lawmakers staged a token walkout against alleged attacks on their workers and elected representatives by MQM-Haqiqi in Landhi and other areas.

Twist in the tale: Missing maid has married of free will, claim police