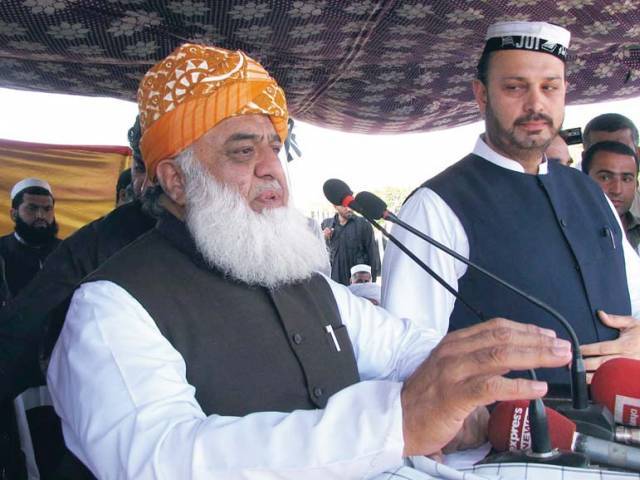 MINGORA: Jamiat Ulema-e-Islam-Fazl chief Maulana Fazlur Rehman confessed on Sunday that his party has no more than pedestrian interest in the Panama leaks scandal and is preoccupied instead with the twin goal of enforcing Islamic Sharia and establishing peace in the country.

“Names of people who are planning to stage a sit-in [against the government in connection with the Panama leaks] are also mentioned in the leaks,” Fazl said in remarks at a public rally in the Mingora area of Khyber-Pakhtunkhwa’s (K-P) Swat district.

The Panama leaks and Pakistani politics

The rally was arranged in connection with a Dastar-i-Fazeelat function, in which around 500 students from the JUI-F affiliated seminaries were handed degrees and certificates.

Without mentioning his name, Fazl severely criticised Pakistan Tehreek-e-Insaf (PTI) chief Imran Khan and once again accused him of acting in interest of the ‘Jewish lobby’.

“The patron of the 2014 sit-in in Islamabad has been engaged in campaigning for his Jewish brother-in-law in Great Britain. The Jewish lobby has imposed its people on K-P to disrupt and discourage the process of Islamisation,” he said.

“However, we will not allow this Jewish lobby to fulfill its objectives,” he said. “Where was he when a war was imposed on the pretext of terrorism just for killing of Muslims?” he said in an allusion to Imran Khan.

He said it was astonishing that those who believe in Islam and strive for Islamisation are dubbed as illiterate and uncivilised whereas those who support and favour Jewish lobbies are named as decent.

Criticising the United States, he said Americans were protecting interests of the capitalist lobby throughout the world and were least concerned about the miseries of labourers and employees.

“Americans always support Moeen Qureshi-like rulers in Pakistan,” he said, in a reference to a former caretaker prime minister.

Talking in connection with the Labour Day, he said the JUI-F supports labourers and their demands. “The labourers can get their rights only after enforcement of Islamic Sharia,” he said.

Fazl also urged the federal government to withdraw at the earliest its decision to extent Customs Act to Malakand division. He also asked for declaring Swat a tourism zone and early construction of Swat Jail, hospitals and other projects.