When deploy­ed along the border with Pakist­an, the system will provid­e India with 600kms radar covera­ge
By Naveed Ahmad
Published: April 29, 2016
Tweet Email 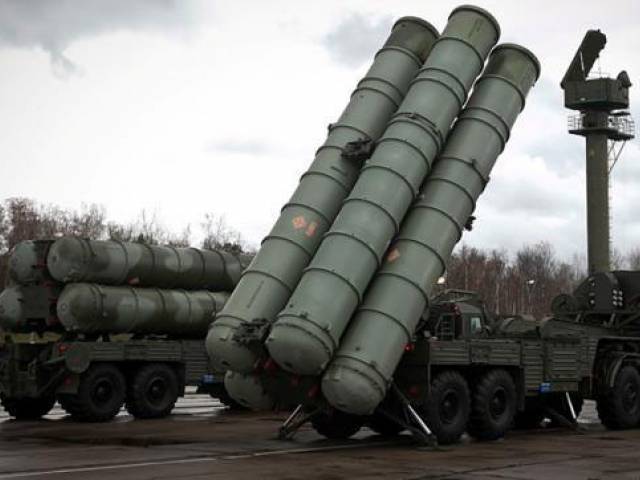 The S-400, a Russian integrated air defense system, is the forthcoming state-of-the-art augmentation of the Indian military arsenal. Last December, India’s premier Narendra Modi and Russian president Vladimir Putin finalised the milestone deal. Dialogue on modalities led India to revise its need from 12 battalions or units to five at an undisclosed cost running into billions of dollars. So far, there is no confirmation as to when the deliveries will begin.

The S-400 uses four different missiles along with a multilayered radar tracking umbrella to cover its entire performance envelope. When deployed along the border with Pakistan, the system will provide India with 600kms radar coverage and the option of shooting down a hostile aircraft or missile 400kms to 40kms outside its territory.

Each S-400 battalion is equipped with eight launchers, a control center, radar and 16 missiles for additional use. The projectiles travel towards the target at blistering speed of 17,000kms an hour.

India is set to become the second recipient after China in 2014. Kremlin is retiring the S-300 and S-400 to replace them with a more lethal S-500 missile system.

Moscow has recently armed Tehran with an earlier version of a similar integrated air defense system called S-300PMU-2 Favorite. The Persians too have ordered five systems. Saudi Arabia was denied the sale after delivery to Tehran was hindered by UN sanctions.

The S-400 Triumph missile defense system is a significant strategic upgrade in India’s military hardware in its pursuit to become a global power. With little domestic debate and no real threat, Delhi has been arming itself to match the Chinese military might. Though, Russian cooperation with China is at a far advanced level, India’s efforts have borne fruit too. Besides deal for nuclear powered-submarines, both are engaged in joint production of fifth generation T-50 (or PAK-FA) fighter jet, a projected counter weight to US F-22 Raptor.

Over the last decade, India has checkmated Pakistan on the US front. Not only has Islamabad faced various pronounced sanctions but also severe political opposition in Washington over transfer of any sophisticated arms including the F-16s falcons.

Washington will continue to play a fundamental role in fuelling the arms race as part of its ‘Pivot to Asia’ policy, which envisaged China as the next global adversary. Being Beijing’s strategic partner, Islamabad fell out of favour with Washington. Pakistan’s policy makers did not do enough to control the damage, practically giving India a walkover. The odds stacked against the delivery of eight F-16 fighter jets symbolise the current state of Pakistan’s diplomacy in the US.

While China may not fret over the S-400 system deal, it will have significant implications for Pakistan’s Air Force and missile programme both. Highly advanced stealth aircrafts or faster low observables ones or stealth cruise missiles can only dodge the integrated defense system. In the wake of an all out war, Pakistan can outnumber the Indian defense system by launching too many missile and fighter jet attacks, making it near impossible for the S-400s or Akash missiles to deny zero penetration in Indian airspace. Such an attack will come at a heavy price militarily and otherwise, with limited success. If the economy was performing as per potential, Pakistan could follow China’s suit and develop hypersonic multistage missiles.

US ‘concerns’ over Russian missile system

While the hypothetical scenario goes to show the soaring cost of war for Pakistan on the eastern front, preparedness for any aggression from the Indian side also requires significant increase in defense spending.

More than the technological gulf, Islamabad’s biggest challenge for the next fiscal year will be poor economic policies and repayment of expensive IMF loans. Over the last decade, Pakistan has achieved little success in impressing upon unprecedented militarisation by India, upsetting the balance of power. Over the years, Islamabad’s diplomacy has been failing her successively as the foreign ministry has not only lacked vision but is also damningly slow in reacting to Delhi’s moves. Until Pakistan-India comprehensive dialogue bears fruit, the defense spending may not lessen for the long haul. Over the last decade, the situation has only gone from bad to worse.