Off-spinne­r tells his academ­y kids to attend matche­s and hold up signs callin­g for his return­
By Nabil Tahir
Published: April 30, 2016
Tweet Email 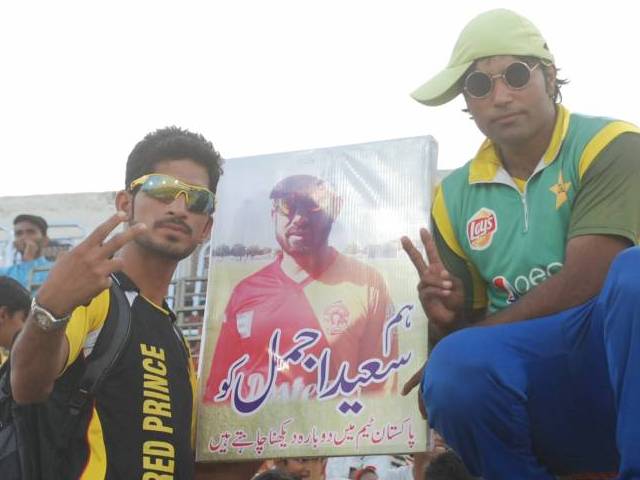 FAISALABAD: Off-spinner Saeed Ajmal has been working hard to secure a return to international cricket ever since he was forced to remodel his action, leading to a fall from grace that saw him go from the best bowler in the world to a Pakistan reject struggling to take wickets in domestic competitions.

In his desperation to return, he has called upon every resource as his disposal, including telling the kids at the Saeed Ajmal International Cricket Academy (SAICA) to show up at the Iqbal Stadium in Faisalabad, where his Balochistan side was taking on Islamabad in the ongoing Pakistan Cup. The kids were asked to cheer him on during the match and were handed signs calling for Ajmal’s return to the international fold. A group of around 50 players from SAICA lined up outside the stands with placards and banners expressing support for Ajmal and right-handed batsman Umar Akmal. “We want to see Saeed Ajmal back in Pakistan team,” said one banner. Another said, “Umar Akmal is a great man, and is most (sic) criticised by media.”

Most of the kids — aspiring cricketers hoping to one day follow in Ajmal’s footsteps — don’t even know what the placards say, let alone understand why they were told to come to the stadium with them.

15-year-old Sohail Asghar, holding the sign supporting Umar Akmal, had no qualms in admitted he didn’t stand behind its message. “I play at SAICA and was asked to come here today to support Ajmal, so I don’t know why mine has a picture of Akmal,” he told The Express Tribune. “A man was distributing these and I just took it to protect myself from the sun as it gets quite hot here in the afternoon and the stadium has precious little shade.” 28-year-old Imran Johnson said they were there in order to get in Ajmal’s good books and get selected for upcoming matches and tournaments. “We don’t get selected easily here at SAICA,” he said. “Only people with money or who can gift things to the selectors are selected, while everyone else is completely ignored.”

According to Johnson, the selectors don’t really seem interested in doing their job either, claiming that a recent trial at the Eden Valley club saw selector Shahid Nazir spend the entire evening talking on his phone. “I have been playing cricket for nine years and even managed to hit six sixes in a row during the trials, yet I was ignored,” he said. “We can’t give the selectors gifts or cash, so we are here to support Ajmal and get selected through that.”

Meanwhile, 22-year-old Shahzad Akhtar said he came to watch the Pakistan Cup since SAICA players were granted free entry. A Pakistan Cricket Board official, Sajjad Ali, confirmed that Ajmal had requested free admission for the kids of his academy, which was granted by the board.