The hunt for Faisal Shahzad

The hunt for Faisal Shahzad

Baharu­l Haque, a former vice air marsha­l with the Pakist­an Airfor­ce has been identi­fied as the father of NY car bomb...
Published: May 5, 2010
Tweet Email 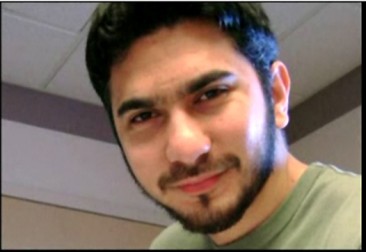 Faisal Shahzad’s picture was flashed all over the world after his name surfaced as a suspect. (Reuters)

KARACHI/PESHAWAR: Baharul Haque, a former vice air marshal with the Pakistan Airforce has been identified as the father of NY car bomb suspect Faisal Shahzad.

It begins in Peshawar:

All day, there was heavy traffic outside house number 139 on Street 6 in Peshawar’s posh locality of Hayatabad.

The gate was padlocked but that didn’t seem to deter visitors. “Security was very tight all day and there were lots of foreigners, policemen as well intelligence agency types in and around the area all day,” says one area resident.

The house is said to belong to Baharul Haque, a former vice air marshal with the Pakistan Airforce. But the interest in Haque stems from the fact that he is the father of Faisal Shahzad, the US citizen being held in America in connection with a failed bombing attempt in New York’s Times Square.

Leading the investigation is the Special Investigation Group (SIG) of the Federal Investigation Agency (FIA), headed by SIG commandant Khalid Qureshi. Earlier in the day, the US ambassador in Pakistan Anne W Patterson had called the interior minister and asked for help in this case.

Malik assured the ambassador of full co-operation and promptly tasked the SIG. But the details emerging so far are sketchy. Shahzad is said to hail from a village near Pabbi called Mohib Banda (see box). Locals in Pabbi say that Shahzad’s family shifted to Peshawar some 20 years ago.

Shahzad is thought to have pursued graduation studies from the Pakistan Air Force Government Degree College in Peshawar before leaving for the US to pursue business studies.

The US passport (see box) is proof he got naturalised during his stay in the US and he is said to have visited Pakistan several times over the years. (However, immigration authorities claim they have no information on the man.) It was on one of these visits two or three years ago, he’s said to have gotten married to a girl from either Mardan or Charsadda.

His in-laws are said to be resident in Peshawar too. “Shahzad recently came to Pakistan for a month,” says a senior intelligence official privy to the investigations being held throughout the country. “He landed in Islamabad on July 3, 2009 via an Emirates flight and left the country to go back to the US on August 5, 2009,” he said.

The address on the disembarkation card was house number 3, Sector I 8/3 in Islamabad, says the official. Shahzad is said to have travelled to several locations in the country during his brief visit but officials say they don’t have an exact record as he travelled on buses and coaches. He is also said to have visited his wife and child in Karachi.

But intelligence officials are tightlipped when asked about the whereabouts of the family. Understandably, everyone seems to be in a bid to distance themselves from Shahzad. Baharul Haque’s relatives in Hayatabad insist they have no official confirmation that the man arrested in the US is indeed his son. Nor is the airforce willing to confirm that Haque was ever one of them.

Meanwhile, the immediate family has disappeared into thin air, even as the security apparatus conducts a crackdown on Shahzad’s friends and suspected collaborators. Two people have been arrested from Karachi in connection with the case. One is Tauseef Ahmed, who’s said to be Shahzad’s cousin and Iftikhar, who’s supposed to be Shahzad’s father-in-law. And another four are said to have been arrested from Islamabad.

There are also reports of another friend, Muhammad Rehan, having been arrested from Karachi. Official sources say Shahzad had stayed with Rehan in Karachi and both had travelled together to Peshawar.

Meanwhile, in the US, prosecutors have formally filed terrorism charges against Shahzad. The 10-page criminal complaint accuses Shahzad of five charges, including that of attempting “to use a weapon of mass destruction” to kill people in the crowded centre of New York on Saturday. Shahzad was arrested from JFK airport in New York on Monday. He was on an Emirates flight to Dubai after the attempted bombing of Times Square. The plane was taxiing just before midnight when air traffic called it back and the 30-year-old Pakistani-born US citizen was caught.

WITH REPORTING BY SALMAN SIDDIQUI, ADIL JAWAD AND FAWAD KHAN IN KARACHI, ASIM AWAN AND ZIA M KHAN IN ISLAMABAD AND IFTIKHAR FIRDOUS IN PESHAWAR.