The strike­s are latest in a surge of violen­ce in and around the city that has severe­ly tested Februa­ry 27 ceasef­ire
By AFP
Published: April 26, 2016
Tweet Email 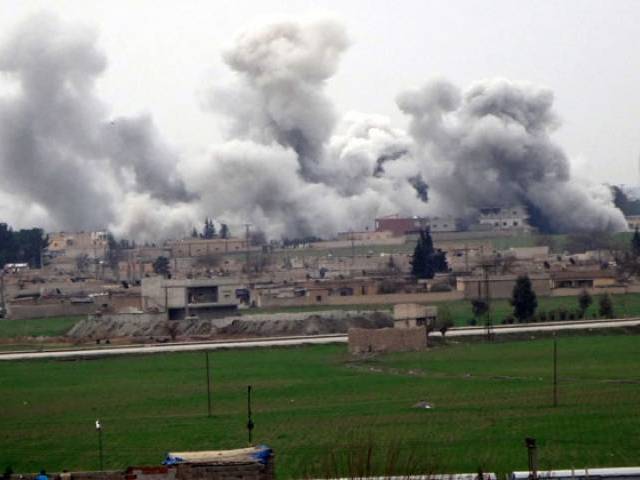 ALEPPO: A barrage of air strikes on rebel-held areas of Syria’s second city Aleppo and a town to its west have killed at least 19 people, emergency workers said on Tuesday.

The strikes are the latest in a surge of violence in and around the city that has severely tested a February 27 ceasefire.

Fourteen civilians were killed in the strikes on rebel-held eastern districts of Aleppo city, the civil defence – known as White Helmets – said.

Five of their own rescue workers were killed when their headquarters in the town of Al-Atarib, controlled by Islamist rebels, was hit by an air strike overnight, the group said on Twitter.

It was not immediately clear whether the strike on Al-Atarib, 35 kilometres (20 miles) from Aleppo, was carried out by the Syrian air force or its Russian ally.

An ambulance and a firetruck, both damaged, were parked in the bombed-out headquarters, surrounded by rubble and twisted metal frames.

Fighting has surged on several fronts in Aleppo province, which is criss-crossed with supply routes that are strategic for practically all of Syria’s warring sides.

Once Syria’s commercial hub, Aleppo has been divided between rebel control in the east and government forces in the west since 2012.

Rocket fire hit government-controlled areas in the west of the city on Tuesday afternoon, said the Syrian Observatory for Human Rights, a monitoring group.

In the rebel-held Fardos neighbourhood, an AFP correspondent saw a youth being helped down a rubble-strewn street with blood streaming from his head and leg.

Violence has rocked the divided city since Friday, with at least 100 civilians killed by artillery or rocket fire and air strikes.

On Monday, rebel shelling killed at least 19 civilians in government-held districts of Aleppo, according to the Observatory.

The fighting severely threatens the February ceasefire brokered by the United States and Russia and comes as UN-brokered peace talks in Geneva stall.

Syria’s main opposition group, the High Negotiations Committee (HNC) halted its formal participation this week in the Geneva talks, which started on April 13.

A leading opposition group, the National Coalition, condemned the strike on Al-Atarib and hailed the “remarkable efforts and bravery of Civil Defence workers”.

“Favourable conditions for the political process cannot be created whilst the Assad regime’s killing machine continues to wreak death across Syria,” the Coalition said in an online statement.

More than 270,000 people have been killed in Syria and millions forced from their homes since the conflict erupted in 2011.