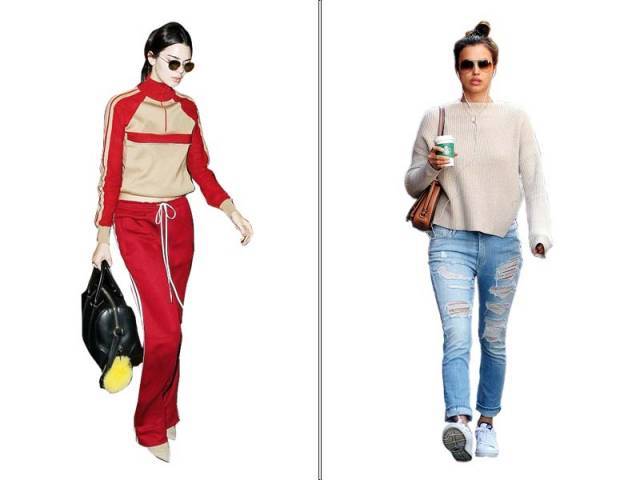 Women often like to wear their hair up and take the make-up-free stance as they partake in their run of the mill daily activities. But that was not enough to stop supermodels Irana Shayk and Kendall Jenner from looking like they just stepped off a catwalk as they strutted down their stuff for onlookers to relish. Sporting a more casual attire, picking up her Starbucks latte in a pair of ripped boyfriend jeans from Frame denim, the Russian hottie certainly looked a cut above the rest. Donning a midriff-baring woollen pullover and trendy white trainers, she’s surely a force to reckon with. The love interest of Bradley Cooper rounded off her eye-catching appearance with a trendy pair of curved golden-rimmed sunglasses. It’s hard to believe the supermodel went completely sans makeup — and looked unblemished! The model-of-the-moment ditched her recently acquired bohemian vibe she channeled at Coachella, and put her comfort first in a slouchy jogging slacks and a corresponding sports top. The 20-year-old remained faithful to her catwalk roots — adorning a pair of posh, pointed footwear to complete the look, even though she didn’t need the extra heel height to elongate her enviable legs. Kendall’s red and cream ensemble, cropped off at the middle, showcased a hint of her taut middle and her jet tresses were pulled back in a fuss-free fashion.