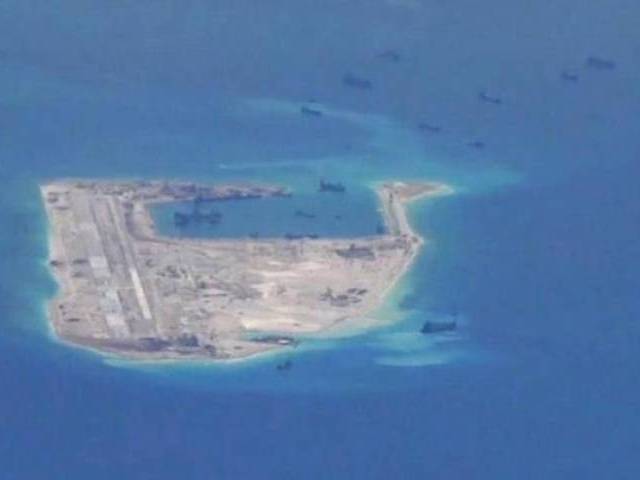 Chinese dredging vessels are purportedly seen in the waters around Fiery Cross Reef in the disputed Spratly Islands in the South China Sea PHOTO: REUTERS

BEIJING: A Chinese military aircraft has for the first time publicly landed at a new airport on an island China has built in the disputed South China Sea, state media said on Monday, raising the prospect that China could base fighter jets there.

The United States has criticised China’s construction of artificial islands in the South China Sea and worries that it plans to use them for military purposes, even though China says it has no hostile intent.

The runway on the Fiery Cross Reef is 3,000 metres (10,000 feet) long and is one of three China has been building for more than a year by dredging sand up onto reefs and atolls in the Spratly archipelago.

They were then taken in the transport aircraft back to Hainan island for treatment, it said, showing a picture of the aircraft on the ground in Hainan.

It was the first time China’s military had publicly admitted landing an aircraft on Fiery Cross Reef, the influential Global Times tabloid said. It cited an military expert as saying the flight showed the airfield was up to military standards and could see fighter jets based there in the event of war.

The runways would be long enough to handle long-range bombers and transport aircraft as well as China’s best jet fighters, giving it a presence deep in the maritime heart of Southeast Asia that it has lacked until now.

More than $5 trillion of world trade is shipped through the South China Sea every year. Besides China’s territorial claims in the area, Vietnam, Malaysia, Brunei, the Philippines and Taiwan have rival claims.