The PTI’s Lahore ‘sit-in’ may prove to be as inconc­lusive as the one in 2014
By Dr Hasan Askari Rizvi
Published: April 17, 2016
Tweet Email 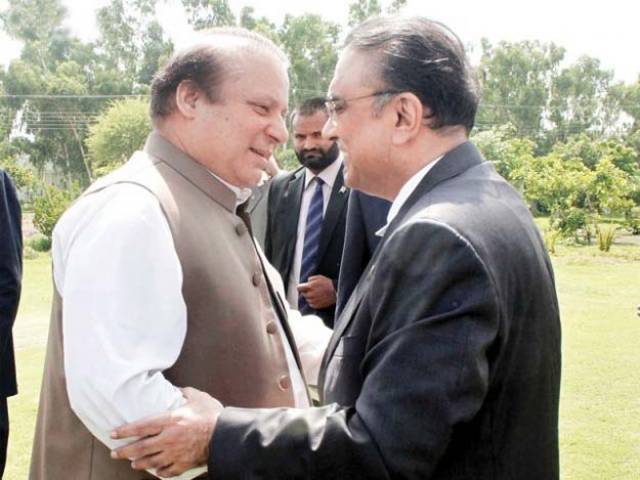 Pakistan’s politics moves from crisis to crisis. It seemed, in mid-March, that the PML-N-led federal and Punjab governments had overcome the major political challenges and their relations with the military had stabilised. A good number of PML-N leaders had started thinking of sweeping the 2018 general elections and ruling the country well beyond that date.

This dream received a setback by a number of quick political and security developments in the final week of March and the first two weeks of April. The latest crisis was triggered by the release of the Panama Papers, which revealed the off-shore financial activities and foreign assets of about 200 Pakistanis. This list included three members of the prime minister’s family, which provided the much-needed opportunity to the opposition to raise ethical questions on the role of the PM. Others pointed out the contradictions in the explanatory statements of the family members of the prime minister.

The PML-N adopted a contradictory policy to cope with the political fall-out of the Panama leaks. On the one hand, the ruling party rejected the notion of moral responsibility of the PM and maintained that the two sons of the PM were doing business outside of Pakistan. Therefore, no question could be raised about their financial activities in Pakistan, nor could the PM be held responsible for their business activities. On the other hand, the PM addressed the nation on radio and TV to defend him and his family. Some members of the federal cabinet and the PML-N’s ‘drum-beaters’ resorted to a counter offensive against the opposition leaders, especially Imran Khan, on TV channels, threatening to expose their corruption. The PML-N activists minced no words in suggesting that if the opposition leaders continued to accuse the PM and his family of financial impropriety, the federal government would expose the corrupt practices of the opposition leaders.

The combative disposition of the ruling PML-N leaders, in defending the financial affairs of the PM’s family in the media, did not deter the opposition, particularly the PTI. They availed of the aggressive discussions to launch more acrimonious criticism of the PM.

Four other developments created additional pressure on the federal and Punjab governments. These included the strong protest by religious groups against the passage of the law for protection of women’s rights in the Punjab Assembly, which they described as a negation of Islamic injunctions; and a sit-in for several days in Islamabad, by religious parties and activists, in the Barelevi tradition, to register fresh protest against the hanging of Mumtaz Qadri. These religious groups included a number of leaders who were known in the past as supporters or sympathisers of the PML-N. The other two incidents exposed the claim of the Punjab government that there were no entrenched violent groups in Punjab and that the law and order situation was under the government’s firm control. These incidents included a suicide attack at a park in Lahore, killing 75 people; and the ‘Chhotu gang’ episode. The military was summoned to restore the authority of the Punjab government.

Imran Khan and the PTI will find it difficult to build political pressure on the PML-N government without getting the cooperation of other opposition parties. The planned Lahore ‘sit-in’ may prove to be as inconclusive as the one in 2014.

The other major opposition party, the PPP, is keeping its options open. On the one hand, it wants a comprehensive scrutiny of the financial affairs of the PM’s family. On the other hand, it does not endorse the PTI’s demand for the resignation of the PM and the proposed Lahore sit-in. The PPP has kept its options open with the hope that the federal government would offer to protect its key activists against corruption charges in Sindh.

Another PPP concern pertains to the situation after the PM is forced out of office. Will there be an in-house change, or will the army impose a political set-up of its choice, thus delaying fresh elections for an indefinite period? The PPP would prefer a weakened PML-N government rather than early elections, because the PPP is in a shambles in Punjab. Other opposition political parties may be inclined to come out openly against the PML-N government if they are assured that new elections would be held within the prescribed constitutional period of time.

The PPP and some other opposition parties, like the ANP, are reluctant to accept Imran Khan’s leadership. Another factor shaping the disposition of the PPP is the reported inclusion of one or two PPP names in the Panama list. The Jamaat-e-Islami is expected to support Imran Khan, but the JUI-F continues to stand by Nawaz Sharif. Other religious parties are expected to wait to see how the confrontation picks up.

Pakistan’s major political leaders are in London, pursuing their exclusive agendas. Nawaz Sharif may seek the advice of financial experts, to cover up the contradictions in the statements of his sons regarding their financial affairs. Zardari would look for a deal with Nawaz, while Imran Khan would explore ways to build pressure on Nawaz.

The army is sitting quietly on the sidelines, watching how the politicians manage the new political crisis. The military’s capacity to influence political change will increase if the current conflict escalates to open and widespread confrontation.

The current uncertain political situation can result in different outcomes: the opposition parties joining together to challenge the PML-N in the streets — accelerating internal conflict; Nawaz Sharif continuing to rule as a weaker leader, giving greater initiative to the military; an in-house change in the PML-N; an interim arrangement for holding new elections as prescribed by the Constitution; a military-backed civilian system that will stay in office for a year or so, for controlling terrorism and political corruption; and a stalemated confrontation between the PML-N and some opposition parties. The PM-LN can run into serious trouble if it overplays its administrative hand against the opposition. The party faces a real testing time.

Politics in Pakistan has entered, once again, a new phase of confusion and uncertainty. There is a need to think of the negative consequences of the on-going political mud-slinging and in-fighting on Pakistan’s economy and the efforts to counter extremism and terrorism.

Following in their footsteps