Campaign against encroachment: Over 460 shops razed in city’s Ramdas Bazaar

Campaign against encroachment: Over 460 shops razed in city’s Ramdas Bazaar 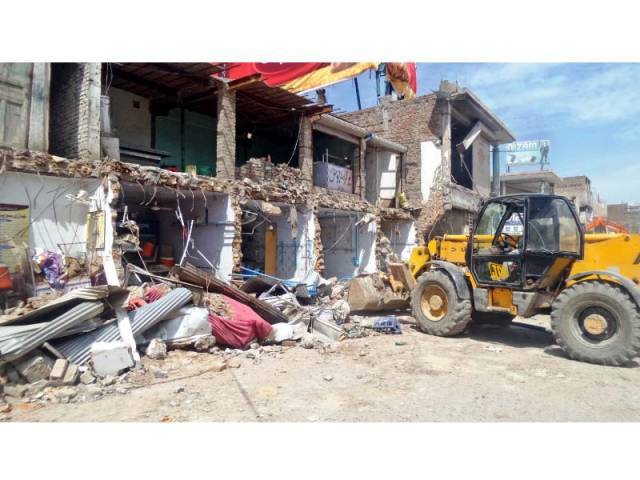 PESHAWAR: The district administration razed over 460 shops to the ground in Ramdas Bazaar as part of the ongoing encroachment drive on Saturday.

The administration also arrested at least 11 people for obstructing the campaign. The drive has been going on for some months and the district administration had issued notices to property owners.

On Friday, residents of Imamia Colony Peshawar blocked GT Road in protest against the encroachment drive in Gulbahar.

Demonstrators, including women and children, carried posters and black flags and criticised the government and the metroplis’ administration for demolishing “everything”. They complained extended structures were removed even from places of worship, including an imambargah.

A large number of protesters blocked GT Road for almost an hour, choking the flow of traffic. They also protested in front of Gulbahar police station and submitted a written application against their properties being demolished.

Imamia Colony residents said if the police will not register an FIR against the government departments responsible they will take the matter further.

Around 2,000 reportedly illegal buildings and shops were demolished by the city district administration.

A major crackdown against encroachments started on April 9. Illegal structures including mosques, imambargahs, shops and markets were demolished on Kohat, Dalazak, Bara roads and in Pishtakhara and Gulbahar.