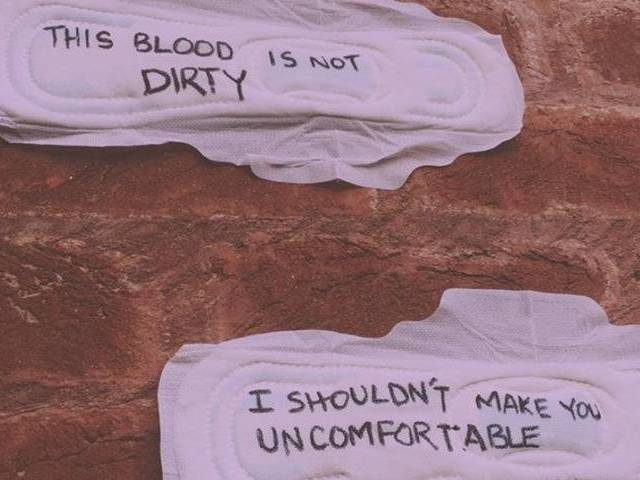 In 2015, students of Delhi’s Jamia Millia Islamia University stuck sanitary pads all over their campus in a bid to raise awareness about rape and sexism. A year on, the act seems to have struck a chord on this side of the border.

It all started with a simple college assignment at Beaconhouse National University (BNU) in Lahore. A group of girls, and boys, decided to protest against the stigmatisation of menstruation and the ‘sharmindagi‘ (shame) attached to it.

The protest, held on April 7 and April 8, aimed to encourage the public at large to accept menstruation as a normal fact of life, instead of treating it as a “dirty little secret” and brown-bagging sanitary pads at grocery stores.

Students from the Department of Information & Technology and Liberal Arts at BNU set out to break this taboo in Pakistan by placing 25 sanitary pads on their university’s wall with important facts about periods and the various reasons why people consider it “gross, weird, or wrong”.

“This is not a campaign; this was merely an aesthetically-based protest as a class project. We chose this because Eman and I feel women face a lot of stigmatisation and ridicule for menstruation, something they have no control over,” one of the students told The Express Tribune.

“Firstly, the protest was against the stigma attached to menstruation and the sharmindagi with which we discuss it. We are made to put pads in brown paper bags when we buy them, we are made to talk about periods in hushed voices as if it’s a dirty secret, and all in all, made to act as if it is something we should hide more so than other bodily functions, when it’s really a natural part of our biology. Several women contract diseases because they are not fully informed of hygienic practices when it comes to menstruation and very few people will actually discuss it,” she wrote in a post on Facebook.

“No, I’m not some shameless libertine, but I don’t think I should feel shame for this, even though I do feel very embarrassed and self-conscious about this whole experience,” she added.

Stressing on the importance of public discourse on the subject, Rahim pointed toward the implications of such stigmatisation by highlighting the high number of women contracting diseases “because they are not fully informed of hygienic practices when it comes to menstruation”.

Elaborating on the campaign, the student said, “We had painted stains on our white kameezes and stood there and talked and interacted with the boys as if everything is alright, and nothing is gross, weird, or wrong.”

She further said she was happy to see that there were also many supporting her and her friends. “My brother and sisters are very supportive of this, even though not all of them live here and I think it’s great. There’s also been a surge of support on social media, which I would like to thank everyone for,” she said.

Last year, Delhi’s Jamia Millia Islamia University stuck sanitary pads with feminist messages all over their campus, which were promptly taken down by the university’s administration. However, it still managed to inspire other university students in the region to carry out protests using sanitary pads to display similar messages.

I was not allowed to enter Memon Mosque in Karachi, because I am a woman

Many took to Twitter to express solidarity with the students:

about time people know about this shit!!!
in awe of the guts https://t.co/r4XbER18GZ

@ImaZompire_ @mangobaaz @aliya_arshad @shhrbano If my God can talk about these taboos in Surah An-Nisa then they are not immoral for me.

Students Just Covered a Wall at BNU Lahore With Menstruation Pads and Shit Got Real https://t.co/6BH1VFAqIl