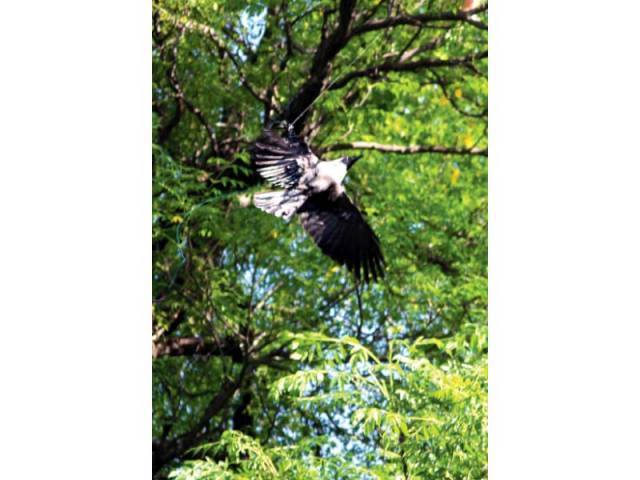 ISLAMABAD: Human beings are not the only ones whose lives are threatened by illegal chemically-treated kite string that has led to bans on the otherwise healthy pastime of kite flying.

Amid the pain caused to mankind by the deadly string, a number of animals are also injured or killed by dangling string.

While the people using the dangerous string may have little regard for human, let alone animal life, there are still people who would go out of their way to help our furry or feathered friends.

Such a case was seen in Islamabad on Monday, when a crow’s wing got caught in a kite string dangling from a tree near 7th Avenue and Kashmir Highway.

The bird was rescued by Capital Development Authority (CDA) fire tenders. Citizens contacted the fire department, which sent a fire truck to free the bird. As the tree was far from the road and on uneven ground, the rescuers could not use the truck and had to use a separate ladder to climb up and cut the string to free the struggling injured bird. The crow then struggled to fly and safely perch in another nearby tree, where it likely breathed more than one sigh of relief.

“When we reached the spot, I saw the bird entangled in the sharp string and hanging upside down from the top of the tree,” said the CDA rescue worker who freed the bird. “The poor thing was fighting for its life”.

He said people told us that the bird had been trapped there for at least two hours. “I saw no point in waiting further, and climbed the tree to free it. It was scared and was struggling to breathe as the string was cutting across its chest and into its wing.”

A member of the rescue team told The Express Tribune that CDA fire tenders rescued 20-to-25 birds every month after they get caught by kite string in trees. The string is too sharp for most animals to bite or cut through.

A senior CDA official said the civic agency is fully equipped to help save the lives of citizens and animals.