Says the gather­ing will devise a joint opposi­tion strate­gy on the issue
By Our Correspondent
Published: April 11, 2016
Tweet Email 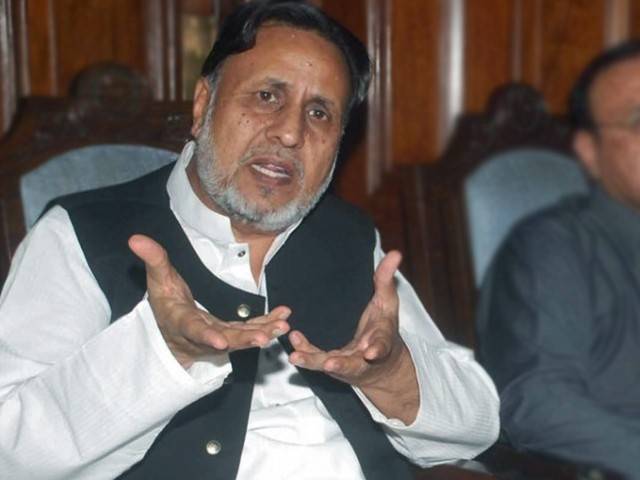 LAHORE: Leader of Opposition in Punjab Assembly Mehmoodur Rasheed has called an all parties’ conference this week to devise a joint stance on the Panama leaks controversy.

The announcement came following Pakistan Tehreek-i-Insaf chief Imran Khan’s address to the public on Sunday. In the address, Khan demanded that Prime Minister Nawaz Sharif step down immediately and asked that the chief justice of Pakistan head the commission formed to probe allegations against some members of Sharif’s family.

The APC will include members from all four opposition parties in the Punjab Assembly: the PTI, the Pakistan Peoples’ Party, the Pakistan Muslim League-Quaid and the Jamaat-i-Islami.

Last week, the four-party joint opposition had written a letter to Tehmina Durrani, wife of Chief Minister Shahbaz Sharif, to praise her stance on the controversy. Durrani had urged the Sharif family to bring its offshore wealth back to the country.

Invitations for the APC have also been sent to the Pakistan Awami Tehreek and the Majlis-i-Wahdatul Muslimeen.

Speaking to the media, Rasheed said the APC would focus on determining a joint strategy on the issue. “Panama leaks are certainly not a conspiracy. It’s divine retribution,” he said. He said there was no moral ground for Sharif to keep holding the office of the prime minister. “He should have stepped down after the surfacing of the controversy,” he said.

Recently, Rasheed had submitted a resolution in the Assembly secretariat demanding the prime minister’s resignation over the alleged offshore wealth of his family members. However, the draft of the resolution was amended by the treasury benches, praising the federal government’s decision to launch an inquiry into the matter.

On Sunday, Rasheed said the opposition would not let the government ignore the issue. He said the PML-N government in the province would also be held accountable for corruption of billions of rupees in schemes like the Sasti Roti and the Youth Rozgar.