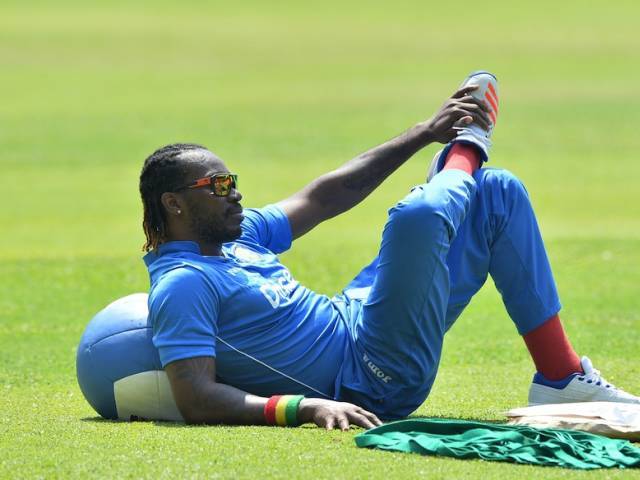 MUMBAI: Chris Gayle is determined to grab the World Twenty20 limelight back from in-form Virat Kohli when the West Indies and India clash in a mouthwatering semi-final in Mumbai on Thursday.

The destructive opener smashed an unbeaten century, which included 11 sixes, in the West Indies’ opening win against England but has only batted once since, making just four.

Kohli has been the star of the tournament so far, expertly guiding India through the group stages with a half-century against Pakistan and 82 not out in a crunch win over Australia.

With the flat wicket at Mumbai’s Wankhede Stadium a dream for batsmen, the last-four showdown between the hosts and 2012 champions is set to be a battle of the big-hitters.

“I am looking to show what Chris Gayle is,” Gayle warned ominously on Tuesday.

“I have only batted twice but this (semi-final) is a perfect opportunity to actually start the tournament and try and pick up where I left off, get a big one for the team and put them in a winning position,” he added.

The 36-year-old described Kohli, who is the top run-scorer left in the tournament with 184, as a “world beater” but insisted neither he nor the West Indies were concerned about individual players.

“Chris Gayle will always be positive. It does not matter which bowler is bowling against Chris Gayle,” he said.

“No names, just cricket ball, beat it as hard as possible,” Gayle added.

India are looking to take another step on their quest to become the first team to win the World T20 twice, after their triumph in the inaugural 2007 edition, and the first on home soil.

They are also bidding to give inspirational 34-year-old captain Mahendra Singh Dhoni — who is though to be close to announcing his retirement — the chance to out on a high.

India were stunned by New Zealand in their first match, but picked up three straight wins to qualify second from Group Two.

By contrast, the Windies won their opening three games to top Group One before being shocked by minnows Afghanistan.

Gayle believes India have the momentum, but warned that “anything was possible”.

“India are the favourites. It is always going to be difficult to beat them here. But the West Indies are ready for an upset,” he said.

The Windies preparations were dealt a blow with the announcement that Andre Fletcher, whose unbeaten 84 fired his team to victory over Sri Lanka, had been ruled out the rest of the tournament with a hamstring injury.

Fletcher has been replaced by Lendl Simmons, who gets a second chance to take part having been originally named in the squad, but having to withdraw on the eve of the tournament with a bad back.

India, meanwhile are sweating on the fitness of left-handed batsman Yuvraj Singh, who picked up an ankle injury against the Aussies. Ajinkya Rahane and Manish Pandey stand ready to replace him.

“I don’t know whether we should make changes, but it is possible, depending on the wicket,” Dhoni said earlier this week.