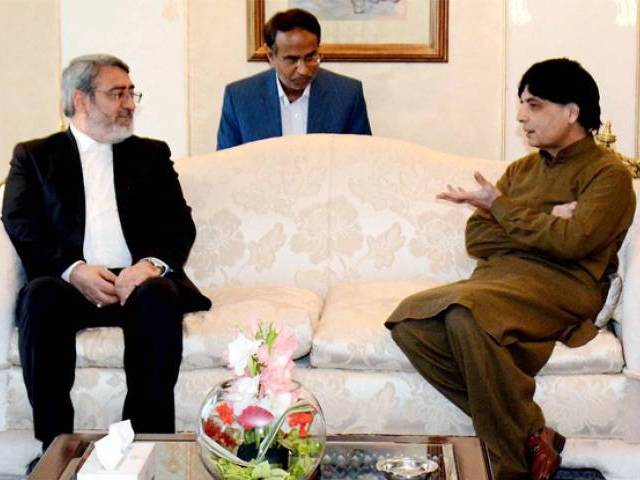 Vowing to further strengthen their security cooperation, Pakistan and Iran on Saturday decided to constitute a high level task force for ‘identification of areas of mutual concern’ and to recommend measures for ‘effective redressal of those issues’.

This understanding was reached on Saturday during a meeting between Chaudhry Nisar Ali Khan and Abdolreza Rahmani Fazl – interior ministers of the Pakistan and Iran, who will supervise the task force.

According to an official statement, the two sides also reaffirmed their commitment to work hand in hand for achieving shared objectives and for ensuring peace and security in the region.

“It was agreed to enhance mutual cooperation in the area of security with greater interaction among law enforcing agencies (LEAs)and intelligence sharing for effective border management, controlling trans-border crimes, including drugs trafficking and human smuggling,” it said.

The two leaders discussed the whole gamut of Pakistan-Iran relations, specially focusing on existing level of cooperation in the area of security, mechanism of interaction among the LEAs of the two countries, shared challenges and the way forward in removing irritants and further strengthening interaction.

Welcoming the visiting dignitary, Interior Minister Nisar observed that the government and the people of Pakistan greatly value their friendly ties with Iran that draw their strength not only from the geographical proximity alone but also from our religious and cultural affinities.

He said we must never forget that the two countries not only share borders but our concerns and destinies are intertwined and interlinked.

“We must never lower our guards against those who will never miss any opportunity to sow the seeds of distrust among the two brotherly countries. We must join hands in neutralising those elements and work hand in hand for peace and socio-economic development of our people,” he said.

Nisar underscored the need for further strengthening the existing mechanism for effective monitoring and management of porous Pakistan-Iran border.  “Loopholes in border management provide an opportunity to criminals and those who want to create instability in our countries and region,” he said.

Iran’s interior minister reciprocated Nisar’s sentiments and said there was a need to make greater efforts for securing mutual interests of the people of the two countries.

Discussing trans-border crimes including the menace of drugs and human trafficking, Nisar observed that the government of Pakistan has been making serious efforts to curb human trafficking.

“However, there is a need to make greater and joint efforts in effectively controlling this crime that is committed through land routes,” he said. The two sides agreed to further strengthen their cooperation in effectively checking the menace of human smuggling.

The two leaders also discussed way forward in further cementing the mechanism of intelligence sharing and maintaining liaison among the LEAs of the two countries. They agreed upon the need for early implementation of all mutual agreements in the area of security.

There was unanimity of views on the need to further improve security atmosphere in the adjacent areas of the two countries, especially in those areas where the developmental activities are being undertaken.

Regional situation also came under discussion. Nisar reiterated that Pakistan has abiding interest in the security and socio-economic development of the region and is making sincere efforts for ensuring lasting peace in the region.

‘Conflict of interests’: Abbasi pulls out of PIA sell-off committee