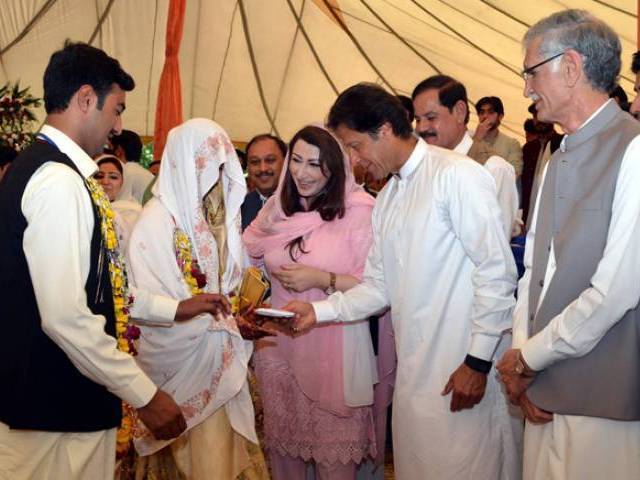 Speaking to The Express Tribune over the telephone on Saturday, Toru said people who were married during a collective ceremony sponsored by the Khyber-Pakhtunkhwa government at the Chief Minister House last week were deserving couples.

A day earlier, ANP provincial president Ameer Haider Khan Hoti had addressed a National Youth Organisation convention held in Mardan. He blamed PTI for arranging a mass wedding for couples who were already married and were related to PTI members. He said the entire façade was aimed at political point scoring.

However, Toru insisted these accusations were baseless. “All the couples belonged to underprivileged families and deserved to be at the ceremony,” she said.

Toru challenged Hoti’s statements and asked ANP leaders to provide concrete evidence to indicate the couples were previously married and were related to PTI members.

“The mass wedding ceremony was PTI chief Imran Khan’s idea and he had asked me to collect data about deserving people who could not afford high expenses of weddings,” Toru said.

She added PTI volunteers and the social welfare department identified couples who had been engaged for the last several years but were unable to get married due to high expenses involved in organising wedding ceremonies.

The couples were then invited to the Chief Minister House.

“First we handed the couples Rs30,000 each so they could purchase clothes, shoes and fulfil their travel expenses and at the time of the wedding, Imran distributed Rs150,000 to each couple as a gift for further shopping,” Toru said.

She dispelled the impression that her gardener was among the 45 couples married on the occasion.

“Whoever is making this claim must back it by proof,” Toru said. “Not a single PTI member’s relative or friend was included in the list of couples who were married,”

Toru said the date for a future wedding ceremony has not been fixed. However, Imran has vowed to get 150 couples married soon.

She also said the future wedding ceremony might be politicised as all members want to include people from their own constituencies.

The provincial government sponsored the wedding of 45 couples and arranged a collective ceremony on March 22 at the Chief Minister House. Imran was the chief guest on the occasion. Chief Minister Pervez Khattak, other PTI members and over 500 people participated in the programme, organised by K-P Directorate of Culture.

Beyond devastation: Burki tribe refuses to register for repatriation