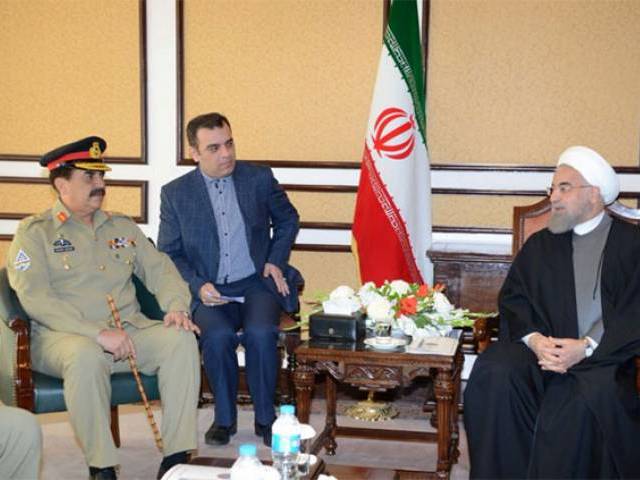 Rouhani, who is on his first visit to Pakistan as a president, met the army chief to discuss matters of importance, the military’s media wing Inter-Services Public Relations said.

He also appreciated the achievements of Pakistan Army in the continuing offensive against militants in Fata, Operation Zarb-e-Azb.

Later, speaking to media, Rouhani urged Pakistan to step forward and progress with its part on the gas pipeline project, saying Iran was ready to provide the facility.

The two countries were tied in the bond of friendship and must move forward with the IP gas pipeline project after the sanctions get lifted, added the Iranian president.

Rouhani on the occasion also praised Pakistan’s sacrifices in the ongoing war on terror.

Meanwhile, responding over reports that the Iranian president rejected discussing RAW’s involvement in Pakistan with the army chief, ISPR released part text of conversation between General Raheel and Rouhani.

“There is one concern that RAW is involved in Pakistan, especially Balochistan and sometimes also use the soil of our brother country, Iran,” said the ISPR statement quoting army chief. “I request, they should be told to stop these activities and allow Pakistan to achieve stability.”

Part Text COAS's conversation with Iran's President in today's mtng;"There is one concern that RAW is involved in Pak,spec Bln&sometimes-1

also use the soil of our brother country,Iran.I request,they should be told to stop these activities &allow Pakistan to achieve stability"-2

Meanwhile, Interior Minister Chaudhry Nisar discussed the arrest of an Indian spy with Iranian counterpart Abdolreza Rahmani Fazli, who called on the former in Islamabad on Saturday.

The interior ministers also decided to constitute a task-force under the supervision of the two countries, aimed at identifying mutual concerns and recommending measures to address these.

“Kul Yadav Bhoshan, a commander-ranked officer in Indian Navy was working for RAW and was in contact with Baloch separatists and terrorists fuelling sectarian violence in Pakistan and Balochistan,” Sarfaraz Bugti told the media.

Following the arrest, New Delhi denied on Friday having any links with the naval intelligence officer rounded up by security agencies in Balochistan on Thursday over suspicion of spying for RAW.

“The said individual has no link with government since his premature retirement from Indian Navy,” said a statement issued by India’s Ministry of External Affairs on Friday.

The ministry confirmed the matter was raised by Pakistan’s Foreign Secretary Aizaz Ahmed Chaudhry with the Indian High Commissioner in Islamabad.

Pakistan, Iran to boosting bilateral trade to $5 billion by 2021

Addressing a Pakistan-Iran joint business forum in Islamabad, Prime Minister Nawaz Sharif on Saturday said Pakistan and Iran enjoyed cordial relations and “by signing the five-year strategic action plan on Friday, we aim at boosting our bilateral trade to the level of $5 billion by 2021.” Discussing Pakistan’s current economic conditions, the premier said, “Over the past three years, Pakistan’s economy has emerged from the crisis of extremism and energy shortages.

“We have achieved macro-economic stability and have moved towards sustained growth.”

Admitting that energy shortages along with security is the main concern for economists in the country, the premier reassured that Pakistan has initiated a number of power projects to overcome this problem.

“Pakistan government has made regional connectivity and trade a priority. We have ambitious plans to generate and spread prosperity within Pakistan, as well as the entire region through economic integration,” he stated.

Addressing the conference, the Iranian president appreciated the “hospitality and warm welcome of the Pakistani government.”

Reffering to bilateral relations between the two countries, the Iranian president said, “We believe that Pakistan’s security is Iran’s security.

“For economic development and prosperity of Pakistan in the area of technical engineering, Iran can help in the development of economic infrastructure, including railway, roads, dams and other areas,” Rouhani said.

Chinese flags defaced in Prague ahead of president’s visit