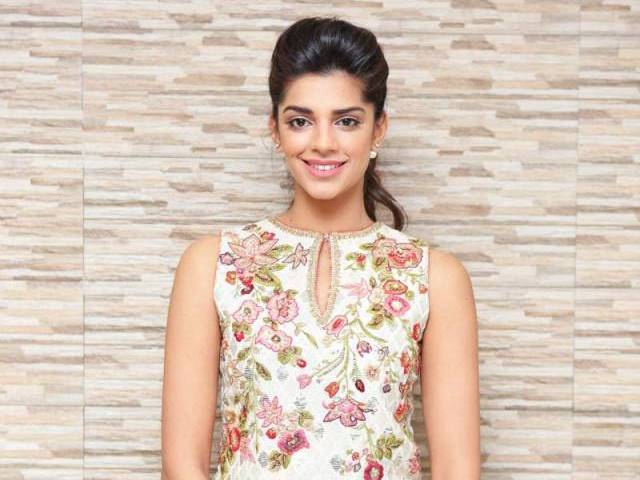 As an actor, singer and model, Sanam Saeed has indeed walked the walk. Her road to fame has pit-stopped almost everywhere, from fashion weeks and Coke Studio to stage plays like Grease and Chicago and of course, the television sensation, Zindagi Gulzar Hai. And just when we thought she might finally have arrived at her destination, she changed gears for the big screen with Nasir Khan’s romantic comedy, Bachaana.

Talking to The Express Tribune, she shed light on her very first feature film experience. Refuting the idea that her character in the film, Aliya, was stereotypically gullible, she said, “If you have watched the film, you will know that there were many instances in the movie where she actually saves Vicky’s [Mohib Mirza] life.”

While Aliya may have come across as a naïve girl caught in a tricky situation, Saeed claimed there was more to her, for she eventually emerges as a strong, independent woman. And that was precisely what convinced Saeed to take on the project. “I loved Aliya’s curiosity and childlike fearlessness,” said the actor. “She is funny, confident and endearing. She may not be the sharpest tool in the shed but she was spontaneous and brave.”

Watch: Sanam Saeed takes us behind the scenes of ‘Bachaana’

When asked about her co-star Mirza’s catchy line from the film, “Larki Pakistani ho ya Hindustani, larki larki hoti hai [A girl is a girl, whether she’s Indian or Pakistani],”  Saeed agreed it sounds a tad bit confusing if taken out of context. “When taken out of context, it’s a confusing statement I suppose. But it makes perfect sense when Mohib says it in the film as Aliya is in trouble at that moment and is being manhandled by kidnappers,” she said,  “That’s when Vicky comes in to save her, tackle the bad men and teach them some manners.” She said the idea was to convey that no matter where a woman comes from, she should be treated with respect.

Saeed feels Bachaana also depicted Pakistani men in a positive light, showing them as reliable and respectful. “Mein Pakistani hoon, aur hum dhoka nahin dehtay [I am Pakistani. We don’t betray people],” Mirza says at one point in the film. Reflecting upon this, Saeed said, “We wanted to convey that Pakistanis are good people. I believe we are and if we don’t reveal the truth about ourselves, who else will? We are not the villains the world perceives us to be.” Saeed went on to praise Khan, saying, “He was very clear about what he wanted from us and how he wanted to execute the scenes. With someone as focused, organised and passionate as him, it’s best to focus on your acting and let one man paint the picture.” Not being involved in the film’s creative process, she hence solely focused on brushing up her acting skills.

And now, just over a month after its release, Saeed is already planning her next move forward. “I will sign up for more stage, films and TV projects in the future. Although it’s hard to make time for theatre at the moment, I will continue to do dramas from time to time if the scripts get me interested,” said Saeed. From the looks of it, it is films that she in most inclined towards. “Right now, it is a very exciting time for films,” she concluded.

Deeming Bollywood as the biggest film industry in the world, Saeed is not hesitant to take on international projects. She will, however, wait until the time feels right. “Yes, as an actor, I would look into Bollywood but only when I feel the time is right,” she said.