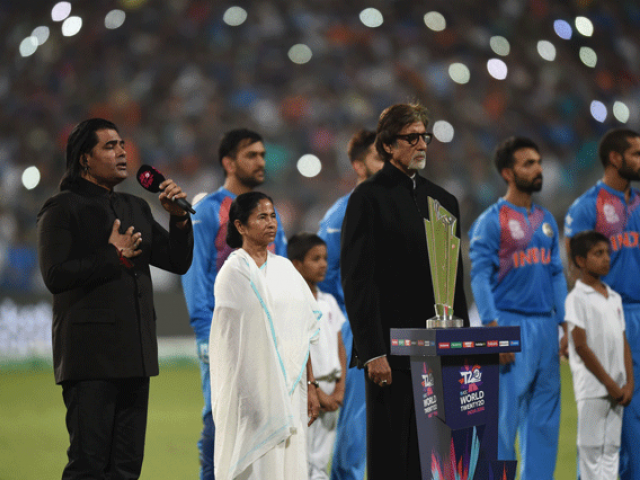 The megastar has been blamed for singing the national anthem incorrectly at the high-voltage between the neighbouring countries.

The soulful rendition of the Bollywood superstar gave Indians goosebumps to instill in them the perfect feeling ahead of the match.

The #IND National Anthem sung by @SrBachchan ahead of #INDvPAK #WT20https://t.co/NdXaA7665y

I had by no means ‘forgotten’ our beloved national anthem: Shafqat Amanat Ali

However, a short filmmaker has filed a police complaint against Bachchan at a local police station in New Delhi, accusing him of taking more time that is mandated to sing the anthem, Indian media reported on Monday.

“Amitabh Bachchan has time and again sung the national anthem of India wrong. This time, at Eden Gardens, he sang it for one minute and 10 seconds in his own style and rhythm, which is totally against the rules framed by the Ministry of Home Affairs and the judgment passed by the apex court,” the complainant said.

The Indian Ministry of Home Affairs has laid down certain rules regarding the national anthem of India, which are to be followed by every citizen of the country.  One such rule says that the duration of the national anthem should be around 52 seconds, but Amitabh sang it for one minute and 10 seconds.

The complaint also stated that in the last lines of the national anthem, Amitabh said ‘Mangal Nayak’ instead of ‘Mangal Dayak’.

Earlier there were also reports that the actor had charged Rs40 million as his appearance fee during the match, according to The Indian Express. However, top Cricket Association of Bengal (CAB) official cleared the air, confirming that Bachchan didn’t charge a single penny.

Cricket Association of Bengal president Sourav Ganguly was quoted by Anandabazar Patrika that Bachchan paid a sum of Rs3 million out of his own pocket for his stay and travel to Kolkata.

Earlier, Pakistani singer Shafqat Amanat Ali was rebuked by Pakistani fans for failing to keep up with the lyrics of the anthem.

The world’s most expensive places to buy water