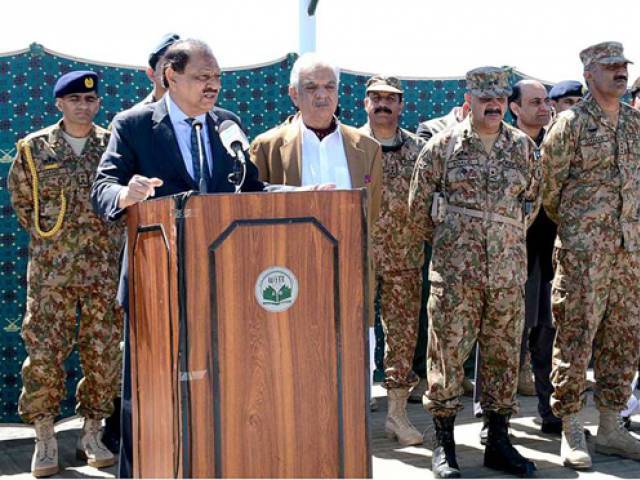 President Mamnoon Hussain said on Monday that Pakistan’s armed forces were fighting a decisive war against terrorism in the tribal areas as he visited troops in Wana, the headquarters of South Waziristan Agency.

“Anti-state elements are out to weaken the country through subversive activities but their evil designs are being foiled by the armed forces,” he told the troops. He also paid glowing tributes to the sacrifices and achievements of the army in the war against terror.

This was the first-ever visit of any Pakistan president to South Waziristan since a massive military operation, codenamed Zarb-e-Azb, was launched against terrorists there.

While voicing satisfaction over the results of the military operation, Mamnoon said that as per spirit of Islam terrorism was a curse, and the campaign was launched to eradicate this menace. He stressed upon the army to take stringent measures for saving future generations from terrorism as he reassured them of the nation’s confidence in them. He also condemned recent terrorist attacks in Khyber-Pakhtunkhwa and called terrorists ‘enemy of humanity’.

The president also praised the role played by South Waziristan’s tribesmen, who had been badly affected by terrorism, in supporting the army and civil administration for rooting out militants.

Speaking about the temporarily displaced persons (TDPs), the president said they are being repatriated in a dignified manner. For this purpose, the civil administration has been reactivated, while locals are being inducted in Levies to prevent terrorists from regrouping in the cleared areas.

He said the present government was taking solid steps for economic revival in the country. In this regard, he referred to the multibillion-dollar China-Pakistan Economic Corridor. He said the mega project would change the destiny of the country in general and the Federally Administered Tribal Areas (Fata) in particular.

Earlier upon his arrival in the agency he was received by K-P Governor Iqbal Zafar Jhagra and senior officials of the civil and military administrations. GOC Major General Khalid Javed gave a detailed briefing to Mamnoon on security situation in the tribal region as well as the situation on the Pakistan-Afghanistan border.

15 dead from alcohol poisoning near Karachi