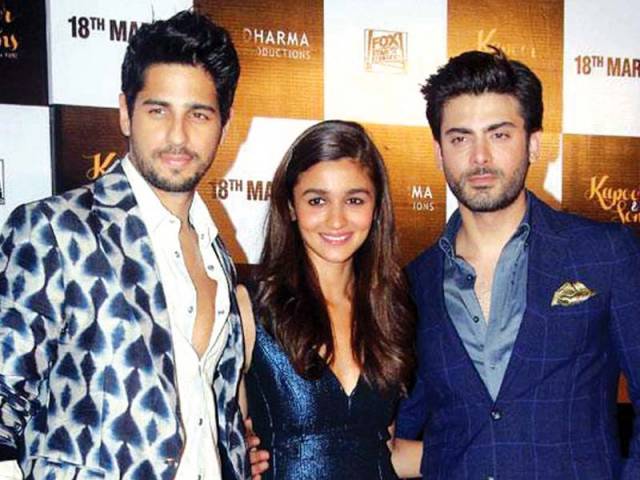 Kapoor & Sons has been garnering praise for the chemistry between its lead trio. PHOTO: FILE

While the anticipation surrounding the India-Pakistan match was bound to be unparalleled, it didn’t seem to have much bearing on the box office collection of Fawad Khan’s latest Bollywood innings, Kapoor & Sons. While the movie was sure to have a successful outing in Pakistani cinemas, not many were expecting it to impress so early on — especially at a time when the World T20 was in full flow.

Released across 67 screens nationally, the Shakun Batra-directorial has managed to rake in approximately Rs36.5 million during its opening weekend, revealed IMGC Entertainment marketing and distribution manager Ahsan Khalil. According to him, the company was always confident about the film despite it being released in such a tricky window mainly due to its excellent storyline and Fawad’s star power. “Even two and a half to three weeks prior to the release of the film, there was a lot of demand for the movie, which prompted cinema owners to increase the number of shows,” Khalil explained to The Express Tribune.

Even though Kapoor & Sons has done reasonably well nationwide, Khalil singled out the multiplex circuits in Punjab and Karachi as the driving force behind its initial run. Breaking down the day-by-day collections of the film, he shared it had managed to earn close to Rs13 million on its opening day. The Dharma production witnessed a slight dip in earnings by 23% on the second day mainly due to the India-Pakistan World T20 match but still managed to collect approximately Rs10 million. While earnings for the third day have not yet been tabulated, a source close to the publication revealed that the film managed to earn approximately Rs1.3 million.

This is not the first instance a Fawad Khan film has done well at the local box office as nearly two years ago, his Bollywood debut Khoobsurat also earned Rs30 million in the span of just three days. Khalil had forecasted Kapoor & Sons to reach Rs100 million by the end of the week. When questioned what sort of box office they were looking at, he replied, “If it continues in this manner, we expect the film to earn about Rs150 million by the time if concludes its run.” In India, Kapoor & Sons managed to earn an over Rs376.4 during the first three days, bringing its worldwide box office collection to Rs570 million, reported Bollywood Hungama.

With no other major Bollywood film expected to release in the coming weeks, Khalil expects the movie to continue in the same form. “Only Batman v Superman is releasing in the current week and judging by previous trends, Hollywood films have a selective audience in Pakistan. They don’t pose much of a challenge to Indian or Pakistani releases.”

Directed by Shakun Batra, the family-drama features an ensemble cast with Siddharth Malhotra, Alia Bhatt, Fawad Khan, Rishi Kapoor, Rajat Kapoor and Ratna Pathak Shah appearing in lead roles. It revolves around the story of a dysfunctional family and their journey back to one another.