Kaira says minist­ers who claime­d they will quit politi­cs if Mushar­raf not served justic­e should do so now
By Our Correspondent / Photo : Abid Nawaz
Published: March 19, 2016
Tweet Email 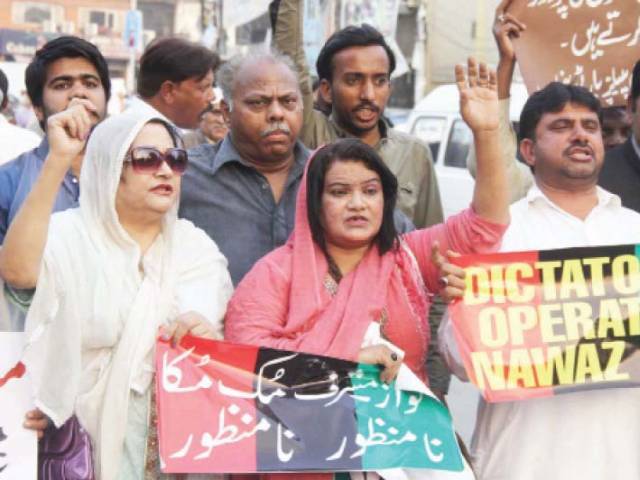 PPP Lahore chapter held a demonstration in front of the Lahore Press Club to protest the government’s decision to let the former president leave the country. PHOTO: ABID NAWAZ/EXPRESS

Speaking on the occasion, PPP Lahore president Samina Khalid Ghurki said that Musharraf had been nominated in a case registered over the assassination of former prime minister Benazir Bhutto and former Balochistan chief minister Akbar Bugti. “By letting the former dictator leave the country, Nawaz Sharif has lost all moral authority to govern the country,” she said.

PPP Punjab general secretary Tanveer Ashraf Kaira said Sharif brothers were fond of serving military dictators. He demanded that the ministers who had claimed that they would quit politics if Musharraf was allowed to leave the country should make good on their word.

PPP Lahore information secretary Faisal Mir said that the Sharif government would be remembered in history as the most cowardly and hypocritic. “He has always harmed democracy and bowed down to dictators,” he said.

Mir requested the Supreme Court of Pakistan to take suo motu notice of the matter and to direct Interior Minister Chaudhry Nisar to have Musharraf extradited through the Interpol.

Comparing Sharif with Roman politician Brutus, he said: “My leader [Shaheed Mohtarma] Benazir Bhutto had made Musharraf quit his army office and Asif Ali Zardari forced him out of the presidency. Nawaz Sharif has facilitated his escape from the country.”

PPP Punjab social media head Jahan Ara Wattoo said that Musharraf had given the Sharif family a safe passage out of the country. She said the Sharifs had now returned the favour. “The PPP will do everything in its power to bring Musharraf to justice,” she said.

Separately, PPP south Punjab president Makhdom Ahmed Mehmood said  that the party would hold demonstrations at all district headquarters on Saturday (today) to protest the government’s decision to let Musharraf leave the country.

Legal glitch: ‘No notification was issued for PRA’s establishment’