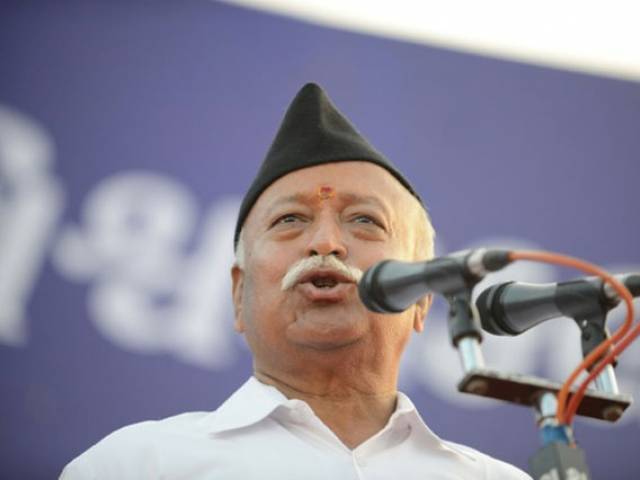 The image of RSS chief Mohan Bhagwat was shared on Facebook and Whatsapp and was an apparent reference to the group's recent decision to ditch its trademark khaki shorts for long trousers. PHOTO: AFP/FILE

NEW DELHI: Indian police said Friday they had arrested two young Muslim men on charges of obscenity for posting a doctored image of a hardline Hindu leader dressed as a woman on social media.

The image showed the head of the Rashtriya Swayamsevak Sangh (RSS), a controversial Hindu right-wing group with close links to Prime Minister Narendra Modi, dressed in a tight pair of women’s trousers and black high heels.

The image of RSS chief Mohan Bhagwat was shared on Facebook and Whatsapp and was an apparent reference to the group’s recent decision to ditch its trademark khaki shorts for long trousers.

Police said they arrested Shakir Yunus and Wasim Sheikh, who are both in their early twenties, after receiving complaints about the image.

“We charged them with circulating obscene content and creating enmity between different groups,” said D K Arya, deputy inspector general for the Khargone region in Madhya Pradesh state where the men live.

The RSS styles itself as a cultural organisation devoted to protecting India’s Hindu culture.

But critics accuse it of being an anti-Muslim pseudo-fascist organisation with a history of fuelling religious tensions.

Some Twitter users criticised the arrests, which come as India’s government faces pressure over its record on freedom of speech.

“How is a morphed Bhagwat image obscene or offensive to Hindus?” Nimisha Jaiswal tweeted.

On what grounds has the arrest for sharing a morphed image of Mohan Bhagwat been made? The last I remember, 66 A was struck down.