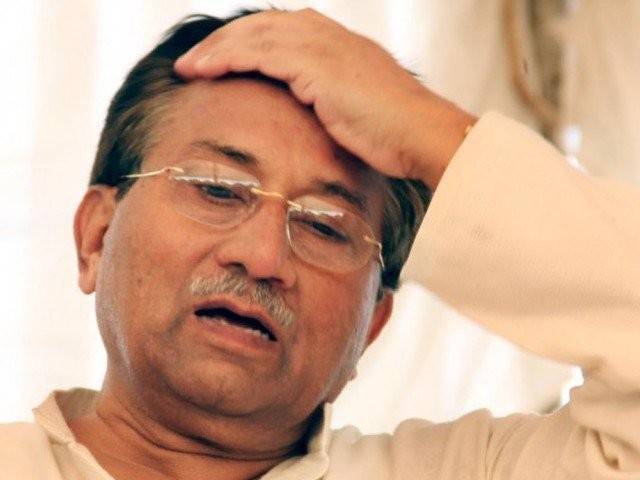 The three-judge bench, headed by Chief Justice of Pakistan Anwar Zaheer Jamali, took up Musharraf’s application on Tuesday to grant him one-time exemption to go abroad.

Musharraf’s counsel Barrister Farogh Naseem apprised the apex court that in its April 8, 2013 order the apex court had directed the federation and all relevant functionaries to ensure that Musharraf does not leave Pakistan till the final decision. Naseem added that the court had directed the secretary interior to place Musharraf’s name on the ECL forthwith. However, the order did not reflect in the final judgment of the august court, passed on 3rd July, 2013, he added.

The counsel further informed that the Sindh High Court on June 12, 2014 had ordered the removal of Musharraf’s name from the ECL, but allowed the federal government two weeks’ time to file an appeal against its decision.

But on the federal government’s plea, the top court’s five-judge bench had suspended the SHC order on June 23, 2014 to remove Musharraf’s name from the ECL and adjourned the hearing for one month to address five questions.

In the four-page verdict, written by former CJP Nasirul Mulk, the apex court had raised five questions: (1) Was the court’s April 8, 2013, decision interim? (2) On the basis of the integration of the law, was the interim decision included in the final decision? (3) Can the Sindh High Court (SHC) suspend the April 5, 2013, decision to put Musharraf’s name on the ECL? (4) Can Musharraf be allowed to travel abroad without changing the court order? (5) Is the government’s decision to put Musharraf’s name on the ECL according to the 2010 rules?

The judgment is still awaited over these questions. During the hearing, the chief justice remarked that the bench did not want the matter to remain pending. Farogh Naseem informed the court that the matter is different from 2013 as at that time Musharraf wanted to go abroad to visit his ailing mother. But this time the situation is of an urgent nature as he needed one-time exemption to go abroad for medical treatment. The counsel also submitted Musharraf’s fresh medical report.

Upon this, the chief justice observed that the bench would be careful about giving any remark on the report.

Later, the bench ordered its office to fix the main case before the larger bench. The hearing of the case is adjourned till today (Wednesday).