Smashing terror infrastructure: Nationwide raids to be stepped up

Smashing terror infrastructure: Nationwide raids to be stepped up 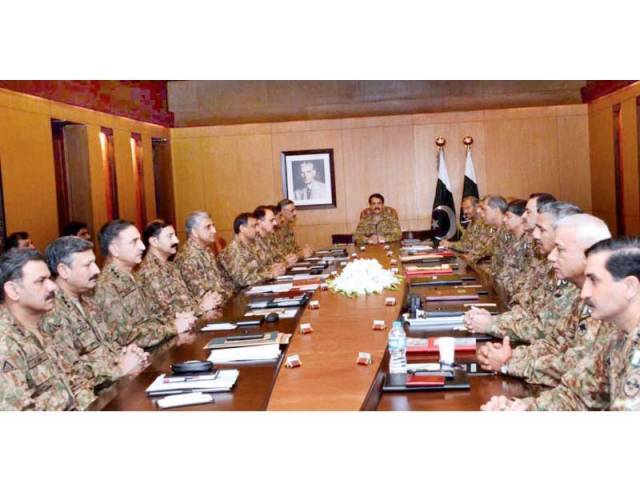 Army chief General Raheel Sharif on Monday called for stepping up intelligence-based operations (IBOs) across the country to eliminate the entire infrastructure of terrorism.

The army chief made these remarks while chairing a meeting of the corps commanders at the General Headquarters in Rawalpindi on Monday.

The military commanders, according to the Inter-Services Public Relations (ISPR), dwelt at length on internal and external security situation among other professional matters.

“Participants of the conference also took a holistic view of the emerging geo-strategic environment and its relevance to the security of Pakistan,” the military’s media wing added in a statement.

Speaking at the forum, Gen Raheel expressed his complete satisfaction over the progress of ongoing military operations in Shawal and adjoining areas in North Waziristan Agency in the Federally Administered Tribal Areas (Fata).

“As we move towards the conclusion of the large-scale kinetic operation in Fata, there is a need to look ahead and consolidate gains for long term stability,” he said.

On February 24, the army chief gave his nod for the final phase of Operation Zarb-e-Azb against terrorists still holed up in the strategic Shawal Valley.

Gen Raheel also directed effective border management and continued, proactive dominance of the cleared areas to maintain writ of the state in Fata.

He reasserted that the return of Temporarily Displaced Persons (TDPs) must be completed as per the laid down timeline.

Last year, the federal government had chalked out a five-phase plan — from March 2015 to December 2016 — to return around 336,762 displaced families back to their homes in Fata, with the exercise expected to cost the exchequer Rs175 billion. According to the States and Frontiers ministry, work on phases three, four and five is currently under way.

The Army chief “stressed on escalated pace of IBOs across the country to eliminate the entire infrastructure of terrorism in Pakistan.”

Paying rich tributes to the sacrifices and valour of officers and men of security agencies in Operation Zarb-e-Azb, the Army chief vowed that under no circumstances these gains will be compromised.

Sarfaraz Merchant to testify in Pakistan