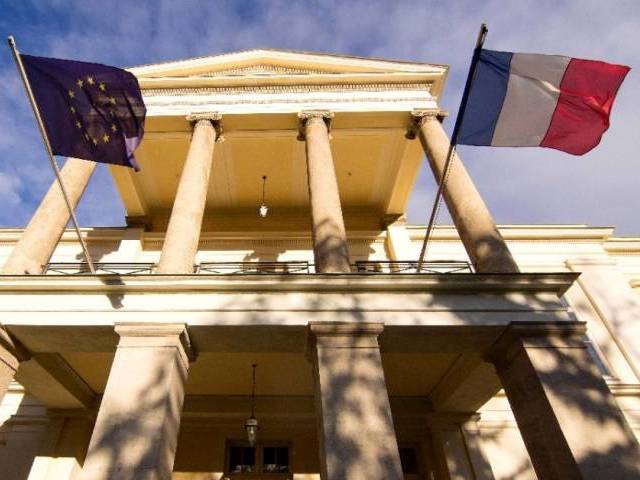 The French and European flags fly at the Palais Clam-Gallas in Austrian capital Vienna on November 11, 2015. PHOTO: AFP

LONDON: Most French people want to follow Britain by holding a referendum on the country’s European Union membership, although they would likely vote to remain in the bloc, a British study has shown.

Some 53 per cent of French respondents to a survey conducted by the University of Edinburgh said they should also have a vote, with 44 per cent saying they would vote to stay in if one was held, against 33 per cent who would leave.

The “View from the Continent” study polled 8,002 respondents across Germany, France, Poland, Spain, Ireland and Sweden about their views on Britain’s EU membership, which will be decided at a referendum on June 23, and the possibility of holding a similar vote themselves.

In Sweden, Germany and Spain, more respondents were in favour of holding a referendum than against, but not an absolute majority when those who were undecided were taken into account.

Only in Poland and Ireland did an absolute majority not want a vote.

If they were to go to the polls, 60 per cent of Germans would vote to stay in, compared to 66 per cent in Poland, 68 per cent in Spain and 69 per cent in Ireland.

When asked if they wanted Britain to remain, France was the only country in which there was not an absolute majority who said “yes”.

Under half of those polled in both France and Germany believed that Britain’s membership was good for the EU.

Spain was the strongest in favour of Britain remaining, at 81 per cent followed by Poland (80 per cent), Ireland (79 per cent) and Germany (73 per cent).

Most countries think that Britain would fare worse outside the bloc, but in both France and Sweden, more people think its economy would do better outside of the EU.

Around half of Germans were in favour of Britain remaining in the EU’s single market in the event of a so-called Brexit, compared to only a quarter of French respondents.

“Our survey shows a willingness to reform the EU, but less so for an individual country to gain exceptional treatment,” said report author Jan Eichhorn, of the University of Edinburgh’s school of social and political science.

British Prime Minister David Cameron secured reforms to four areas of the EU as part of a pre-referendum push to take back some powers from Brussels.

His bid to reduce access to welfare for EU migrants appeared popular across the continent with 46 percent of German and 53 percent French respondents backing a cap.