Fighting for rights: ‘Laws made to protect women are not implemented’

Fighting for rights: ‘Laws made to protect women are not implemented’ 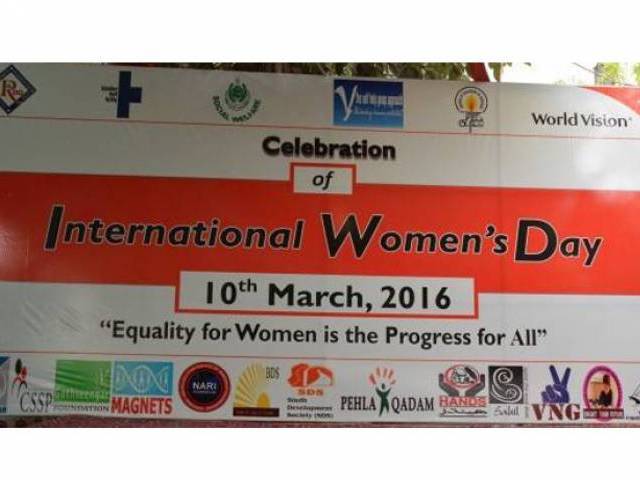 SUKKUR: We have devised laws to protect the women but they are not implemented, said Riverside Development Organisation (RDO) executive-director Munawar Gill.

Despite the fact that women are working in all fields in Pakistan, they are treated as second-grade citizens when it comes to their rights. “This is the dilemma of our society, as our words speak louder than our action, which is not fair,” he claimed.

Gill was speaking at a seminar titled, ‘Equality for women is the progress for all’, on Thursday. The event was organised by RDO in collaboration World Vision, Idara-e-Taleem-o-Aagahi (ITA), Pehal Pakistan and Social Welfare Department in Sukkur in connection with International Women’s Day.

Expressing her anxiety over the plight of the women in Pakistan, RDO manager Sara Sahar said that she spent her entire life serving her parents, then her in-laws and children. However, nobody is willing to give her basic human rights.

ITA teacher Rashida Haroon also reiterated the issue. The women are also working along with catering to the needs for her family yet they are denied their rights, she claimed.

Today, women are working in all fields including education, health, police, media, armed forces and others, said Shabnaz of Kindernothilfe. Therefore, they should not be treated less than men. If a woman is working on a higher post than her husband, then the husband feels inferior. This thinking needs to be rooted out, she added.

“This world would have been colourless without women,” said Baitul Maal assistant director Shabbir Memon. There are many laws that safeguard the rights of women but their lack of implementation is defeating their purpose, he claimed.

It is not fair to celebrate one day dedicated to women, remarked Sahar. “I think all 365 days of the year should be attributed to women.”

Celebrating women’s day should not only be confined to making speeches, rather practical solutions needed to be implemented, added Memon.

Crimes against women, which include domestic violence, harassment at work place and on the streets, child marriages, karo-kari killing, are rampant in our society, said Sahar. She demanded that violence against women throughout the world needs to be curbed.

Inspector Zuhra Shah remarked that as a police officer she deals with many cases pertaining to domestic violence, sexual harassment and attempted murders.

Lack of education and awareness are the main factors behind violence against women, she claimed.

On the occasion, the students of RDO School and staff presented tableaus on issues such as gender bias, eve teasing and child marriages.