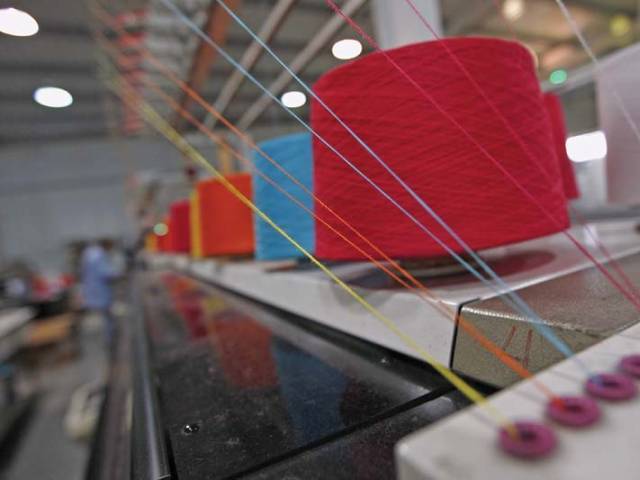 Pakistan’s textile mills were getting just 4-6 hours of gas supply for over five years. PHOTO: REUTERS

All Pakistan Textile Mills Association (Aptma) Chairman Tariq Saud has said that 24-hour gas supply to Punjab’s textile mills is expected to increase output, as he hinted at a possible revival of the industry that has long been under duress for one reason or another.

The statement came after Sui Northern Gas Pipeline Limited (SNGPL) recently started supplying re-gasified liquefied natural gas (RLNG) to over 300 textile units in Punjab. This has changed the scenario in the province whose textile mills were getting just 4-6 hours of gas supply for over five years or so which virtually crumbled output.

“Punjab’s textile mills have started getting 24-hour gas supply from this week, this development has generated a very positive response from the industry,” he told The Express Tribune.

“We are very hopeful for increased output in March and in the coming months. But from March onwards, the textile industry needs to negotiate the gas price with the government and we expect to get gas on a lower price,” he said when asked about the mechanism of gas price.

At this time, Aptma members in Punjab are getting gas at $6.31 million British thermal units (mmbtu). Textile industry in Punjab is now getting about 200 million cubic feet per day (mmcfd) gas – enough to boost output of most mills in the province.

“We have concerns over the price but the general mood of textile mill owners is very positive because of two reasons. Firstly, textile mills in the province were severely gas starved so the gas price was not their primary concern. Secondly, the mill owners believe they will get gas at lower rates in the coming months.

“Our gas demand is so high that we can easily consume 300 mmcfd to 400 mmcfd gas in Punjab alone,” he said.

The CEO of ChenOne – a subsidiary of Chenab Group – Mian Kashif Ashfaq acknowledged the development and said this will certainly boost the output of the mills.

“We are confident that the gas supply to Punjab textile mills will also help increase overall textile export of Pakistan,” said Ashfaq.

Aptma officials met Federal Minister for Petroleum and Natural Resources Shahid Khaqan Abbasi in the last week of January and urged him to allocate 300 mmcfd gas to the textile industry. The minister assured them that the textile industry would get gas from the first week of March and the government honoured its commitment.

Energy woes have forced every gas consuming sector in the country to run after the newly imported LNG, which is expected to become a major part of Pakistan energy mix in coming years. The sectors that are immediately demanding more gas supplies from the government are textile, power and fertiliser.

In the second week of February, Pakistan and Qatar signed a long term 15-year liquefied natural gas (LNG) supply agreement. According to the agreement, Qatar Liquefied Gas Company Limited will sell LNG from 2016 to year 2031 to Pakistan State Oil (PSO). The annual contract quantity for 2016 has been agreed at a prorate of 2.25 metric tons while the price for each cargo has been agreed at 13.37% of Brent.