Bringing education to the streets of Karachi

Bringing education to the streets of Karachi 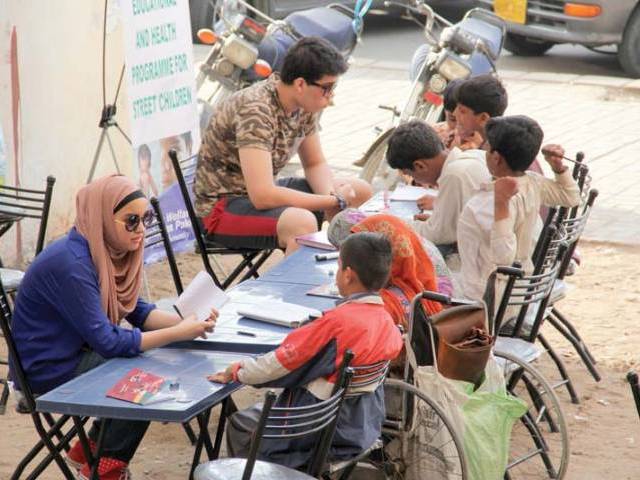 KARACHI: For those unfortunate children who are unable to go to school, a brother-sister duo has brought the classroom to them.

Residents of Sea View Apartments, Shireen and Hasan Zafar teach more than 25 street children, who sell flowers and tissue papers or beg at traffic signals on the streets of Defence Housing Authority. The siblings set up tables and chairs near Café Clifton on Khayaban-e-Shamsheer and spend nearly two hours every day teaching the children basics, such as alphabets and counting. The street school runs six days a week from 4:30pm to 6pm.

Education for all: Govt to set up school for street children

“A few months ago, I was passing by a [traffic] signal when a girl begging there came up to me and asked me how I was feeling, instead of asking for money,” recalled 12-year-old Shireen, who is a student of class seven. Touched by the girl’s query, Shireen decided to help out little beggars who cannot afford to go to school.

“I discussed the idea with my elder brother to teach some of these kids and motivate them to study hard,” she said, adding that the idea for a small session turned into a whole classroom for street children.

Her elder brother, 15-year-old Hasan, agreed immediately with his sister but Shireen had a hard time convincing her classmates to help out. Hasan said he always wanted to spread awareness and work for education and Shireen’s idea was perfect to change his thoughts into reality.

Hasan, who is a student of class nine, thought there was no better way to utilise what they have studied at their schools. “To manage time after school is not that difficult,” he shared. “I do not use my phone for two hours and come here instead to do something I like.”

One of the students at the school is Pashmina, a 16-year-old girl from Neelum Colony, who is suffering from polio, but comes to these classes regularly to study basics of English, Mathematics and Urdu. “If I am lucky enough to get educated, then why not these children,” said Hasan.

Increase in school fees forces parents onto the streets

Pashmina, who attends classes regularly, said she wanted to study but her family could not afford it. “My mother works as a maid in a bungalow,” she said. Pashmina is proud of what she has managed to learn in the last two months. “I have learned [multiplication] tables of two and three and learn all the alphabets of English and Urdu,” she shared.

Salman Khan, who comes to the classes from his house in Shireen Jinnah Colony, said that he sells tissue paper near Sea View before and after the class and manages to make Rs300 every day. “Earning is my need but studying is my want,” he said, adding that he wants to study enough to be able to work at an office one day.

“I sell these crackers the whole day,” said Albela, who was unable to tell his age. He brings his bag of crackers with him so he can go back to selling them once he is done with class.

To make sure the children stay committed, Shireen and Hasan saved their pocket money and paid each student Rs20 after every class. “They tried to conduct the classes for the children at our house but the children were hesitant,” shared Sarwat Ali Shah, the siblings’ mother.

The duo found its current spot near Café Clifton and was able to maintain attendance at the classes for several weeks. Now some people have started helping them by providing juice boxes to the children along with providing a daily stipend of Rs50 to keep these children motivated.

Rana Yasmeen, a government school teacher of basic pay scale grade 15, also spares time from her busy schedule and helps Shireen and Hasan conduct classes. She said this is her attempt to help make the city more educated.