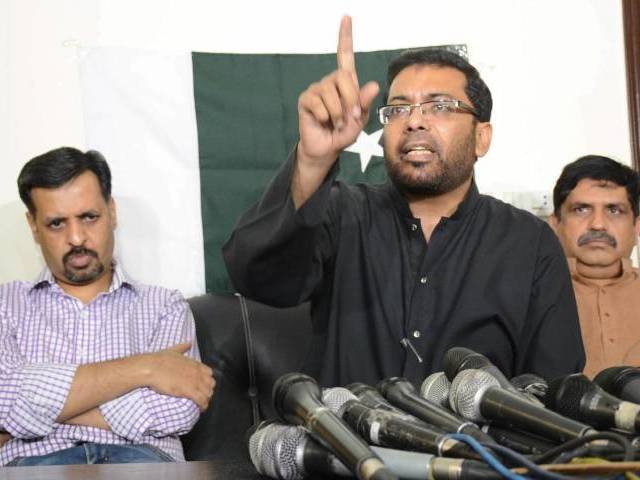 On Saturday night, Sagheer was among those MQM leaders who were summoned to the party headquarters Nine Zero, where they pledged that they would remain loyal to Altaf and would not abandon him.

But Sagheer, who has served as health and environment minister in Sindh cabinet, convened a news conference with former leaders of the party on Monday.

“I am ending my 28-year-old association with the MQM,” said Sagheer, flanked by Kamal and Kaimkhani at their new headquarters in the upscale Defence neighbourhood of Karachi. “I am [also] resigning from the Sindh Assembly.”

The former minister’s move has left the party leaders in shock. They found it hard to believe that until a day earlier Sagheer was with them and had also participated in MQM’s protest against Kamal and Kaimkhani on Friday.

Sagheer reiterated what Kamal said at his news conference on Thursday. He said Mohajirs (Urdu-speaking people) were suffering without a cause and the MQM had links to Indian intelligence agency RAW. He also claimed that Altaf was alcohol-dependent and did not care for any party worker.

Sagheer apologised to his voters and admitted that he had failed to deliver on his promises. He said he wanted to work for the country’s development, adding that his conscience did not allow him to accept the things happening in the MQM.

Mirroring Kamal’s clarification, Sagheer said he was not against the MQM or any of its workers, adding that none of the party workers should be considered traitors.

He said he refrained from appearing before the media and was ‘inactive’ during the Sindh Assembly’s sessions because he did not feel comfortable saying the things he did not believe in. The former minister also claimed that ‘many others’ might be joining Kamal’s new party. Meanwhile, in response to Interior Minister Chaudhry Nisar’s demand to prove the allegations levelled against the MQM chief, Kamal said the government already has all the evidence it needs and it should now take action.

In rejoinder to Sagheer’s news conference, a party spokesperson claimed that the 1992 episode was being repeated to eliminate and divide the MQM, as well as to destabilise the unity of the deprived and unprivileged class, including the Mohajirs, but the conspiracy would be foiled once again.

Since the party’s inception the ‘establishment’ has been trying to eliminate the only political party representing the Mohajirs as well as conspiring to sideline the MQM chief, he alleged in a statement.

The spokesperson said evidence of the former MQM leaders’ allegations should be brought to court. He reiterated ‘negative, baseless and poisonous propaganda’ was being carried out to ‘defame the MQM’.

He said the MQM ‘categorically denies’ the allegations of having connections with any foreign secret agency, terming them ‘preposterous’ and ‘ridiculous’.

A veteran party supporter told The Express Tribune that MQM workers gathered at Nine Zero to express solidarity with their leader. “I personally consider them traitors. They took advantage of all the luxuries accorded to them and then walked away,” said Muhammad Ramzan.