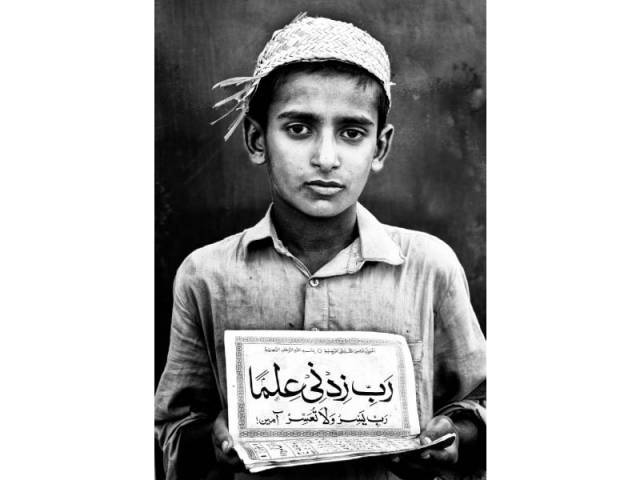 One of the photographs on display at the exhibit. PHOTO: MARIAM SHAFQAT/EXPRESS

The photojournalists have come together to present images of Pakistani schoolchildren from across the nation in a bid to express solidarity with those martyred in the 2014 Peshawar carnage.

Abdul Waris, one of the event’s organisers, said the exhibition is the first of its kind. Waris—who works at a photography magazine—said the initiative is a mammoth experiment in relation to the surface and printing method regarding contemporary Pakistani photography.

“We have also tried to break the trend of holding exhibits at galleries alone by organising the event in a public place,” he said.

He said that was why the title and theme of the exhibit has been taken from Noon Meem Rashid’s Roshni Toh Tum Bhi Ho. Ghani said all children who had suffered at the hands of tyranny and terrorism have the inalienable right to get educated in face of all odds.

We see the APS and BKU martyrs as beacons of light, he said.

We have attempted to portray every region of the nation in the work being displayed at the exhibit, Ghani said. “We have tried to symbolise the struggles and hopes of every schoolchild in the nation,” he said.

One of the most striking images on display shows a Kashmiri schoolgirl clutching an Urdu textbook inscribed with the territory’s anthem on it. Shedding light on the background of the picture, another participating photojournalist Amna Yasmeen said the girl traverses a great distance everyday just to go to school. Yasmeen said the photo captures her resolve to learn despite all odds.

The exhibit will conclude on March 6.

Violence against media: Union not seeking action against assailants