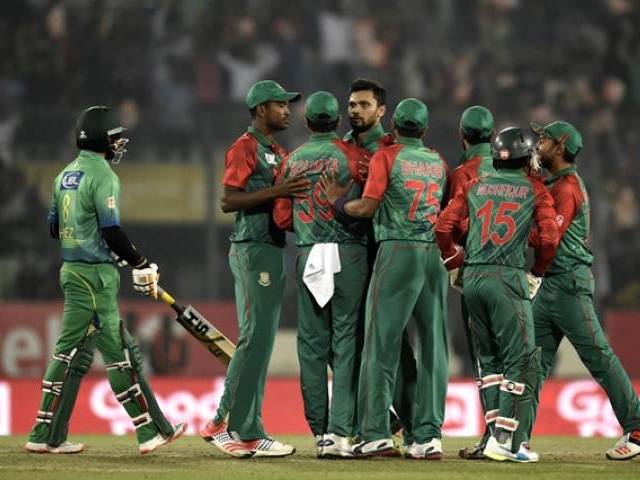 Pakistan were knocked out of the 2016 Asia Cup final’s contention by Bangladesh on Wednesday when the tournament hosts beat Shahid Afridi and co by five wickets.

Pakistan won the toss and opted to bat first but the batsmen were their usual self and kept giving away wickets early in the match. Pakistan were four down on 28 in the ninth over. Sarfraz Ahmed (58) and Shoaib Malik (41) then added some decency to the total with a 70-run partnership for the fifth wicket.

Al-Amin Hossain bagged three wickets for Bangladesh while Arafat Sunny was the second best with two wickets in his four overs.

With only three runs needed in the last over, Anwar Ali was struck for a boundary on the very first ball by Mahmudullah.

Bangladesh will now face India in the March 6 final. Meanwhile, Pakistan and Sri Lanka will take on each other in a dead rubber on March 4.

Moreover, the news also came in that Ahmed Shehzad has been asked for his passport by the Pakistan Cricket Board. Reports suggest that he will replace the thrice-failing Khurram Manzoor.

Man of the match is Soumya Sarkar.

Mashrafee Mortaza: It looked like a semi-final, but boys played really well. I asked them not to take any pressure, and they acted accordingly. It was a crucial match, but the middle-order played well. A big thank you to the crowd for supporting us. We will try to give our best performance in the final.

Shahid Afridi: I want to congratulate India and Bangladesh for qualifying for the final. We keep on committing the same mistakes, but bowlers did really well. We have a tough group in the World T20, so we have to do something special to turn it around.

Anwar Ali in for the last over and bowls a full-toss. Its a FOUR and Bangladesh are through to the final against India.

No-ball, FOUR and only four needed off seven balls now. Single taken on the last ball and Bangladesh need three off the last over.

No-ball and a catch is taken at long-on. Free hit while Bangladesh take two runs. Three runs off it and Bangladesh have a free hit too… in the block hole and a single is taken.

Muhammad Sami with 18 off 12 needed by Bangladesh.

FOUR! Short and Mashrafe closes his eyes, it hits his shoulder and runs down towards fine leg.

FOUR! Captain Mashrafe hits it towards mid-off and Sami misfields it.

BOWLED! Shakib tries to scoop and Amir rattles his stumps.

In the block hole and a dot.

Muhammad Amir has been given the ball by Afridi. He knows the importance of this over.

SIX! Short and wide on off, Mahmudullah goes flashing over extra cover.

Muhammad Irfan bowls his last over.

Mahmudullah to face the last ball… dot ball; 35 needed off 24.

Muhammad Sami in for third over.

Three runs a wicket off the over by Malik.

Shoaib Malik has been called in.

BOWLED! This is what you call a perfect yorker. Amir does it again for Pakistan. Soumya Sarkar departs for 48. Shakibal Hasan has joined Mushfiqur Rahim in the middle.

Shahid Afridi gives away only four runs in the over. Meanwhile, the umpire says no to another big LBW appeal. Afridi’s face turned read. The ball pitched on middle and straightened up and Mushfiqur Rahim was in the middle of the sweep. Replay shows the ball hit his hand.

Single off the last ball; 52 off 48 now for Bangladesh.

Muhammad Sami is back to find a wicket.

FOUR! Down the leg side and swept wide off short fine leg towards square leg.

FOUR! Short and hit with utter ease towards midwicket by Soumya.

Brilliant effort by Umar Akmal at the square leg boundary. Soumya goes for a switch hit but Umar denies him a boundary by putting in a dive and holding on to the ball.

BOWLED! Sabbir Rahman misses the straighter one as he advances forward. Mushfiqur Rahim joins Soumya in the middle.

Shahid Afridi into his second over.

Single followed by three runs and a dot. Two more singles of the next three balls.

So Anwar Ali has been given the seven-over old ball.

FOUR! Soumya sweeps and the leggish delivery by Afridi connects to the lower side of his bat and runs past Muhammad Irfan at short fine leg.

Three singles off the first five balls. Cut towards deep point for a single on the last ball.

Muhammad Irfan continues into his third over on the trot.

Six runs off the over.

A loud LBW appeal on Sabbir. The ball was hitting the leg-stump convincingly. The umpire must have been deceived by the ball’s movement towards leg side. Single taken!

FOUR! On Sabbir’s legs and he just nudges it towards square leg.

Muhammad Sami with his pace now.

Dot to end the over. Two off it only.

Muhammad Irfan in for his second over. Can he strike again? Pakistan want him to.

FOUR! Short and Soumya waits and dispatches it towards midwicket. Bangladesh not giving respect to Amir.

Muhammad Amir steams in again, beats Soumya with an in-swinger.

LBW! Tamim caught in his crease by Irfan. Sabbir Rahman is the new man in.

FOUR! Short and on off, Sarkar latches on to it and goes square through off.

Eight runs off the first over

SIX! Tamim Iqbal hits one over the midwicket boundary.

Muhammad Amir to start for Pakistan. Tamim Iqbal and Soumya Sarkar open the chase for Bangladesh.

OUT! Full-toss and Anwar Ali is caught at deep midwicket.

Another two taken from midwicket by Anwar. Great running from both batsmen.

In the block hole and Sarfraz defends it towards first slip for a single. Anwar faces… Two runs taken towards midwicket.

Anwar brings Sarfraz on with a single… SIX! Sarfraz swings it over square leg.

Al-Amin Hossain bowls the last over.

FOUR and FIFTY up for Sarfraz Ahmed. He goes over covers and beat Shakib at deep covers this time.

Full-toss and Anwar was late into the shot. Single taken.

FOUR! Tests Anwar with a short ball who top-edges it towards fine leg.

Another single from Shakibal Hasan at deep cover. Brilliant bowling from Taskin.

Sarfraz steals a single from the deep cover fielder. Anwar goes to same region for a single.

Taskin Ahmed to bowl the penultimate over.

Single taken Anwar towards extra cover, oh wait! Anwar runs for another as their was no one to receive the ball at the non-striker’s end.

Anwar receives one in the block hole and defends it back to the bowler.

OUT! Afridi mistime a full-toss towards midwicket for a catch. Anwar Ali walks in and Sarfraz brings him on with a single to face the fifth ball.

Al-Amin Hossain in for his third over.

Two taken by Sarfraz and follows it up a single to face the next over.

Malik faces again… OUT! goes for a slog sweep, skies it hight and is caught at square leg. Captain Shahid Afridi joins the vice-captain Sarfraz.

Two taken by Malik. FOUR! And Malik cuts the next ball square through off to get the boundary.

Sarfraz takes a single off the first ball.

Arafat Sunny in for his last over.

FOUR! Full-toss and Malik hits it straight past the bowler with a horizontal bat.

Dot followed by a single, double and another single.

Shakibal Hasan bowls his last over.

Last ball by Mashrafe to Sarfraz… SIX! Full-toss and Sarfraz slaps it over deep midwicket.

A quick double, followed by two singles and a dot.

FOUR! Sarfraz walks out this time and finds the extra cover boundary.

SIX! Shoaib Malik steps outside the crease and goes over the head of the bowler.

Arafat Sunny in for his third over.

Eight runs off the over. A good over for Pakistan.

FOUR! Cut past point by Malik as the diving fielder get not even a touch on the ball.

Mashrafe Mortaza is back for his third over.

Only six runs off the over. Pakistan haven’t even reached their fifty yet. Are they counting on Afridi and Anwar to come in and fire right away after these two batsmen?

Shakibal Hasan in for his third over.

FOUR! Just kissed past the keeper towards fine leg by Malik.

Malik goes through covers to find a single on the fourth ball.

Arafat Sunny is back and bowls his second over; starts with three wides.

FOUR! Cut by Sarfraz this time and it beats point to the boundary.

Shakibal Hasan bowls his second over.

Loving the energy&positive approach of the Bangladesh team.Also gr8 captaincy from MortazaHis bowling & fielding changes hav been spot on

OUT! Umar walks out to Taskin and skies it into the hands of the fielder at deep point. Shoaib Malik walks in to join Sarfraz.

Taskin Ahmed is back. He has given only one run in his two overs. Is he as good as Muhammad Amir?

Shakibal Hasan comes on to bowl now. Pakistanis will have enough experience to face him after playing alongside him in the Pakistan Super League.

Mashrafe Mortaza runs in for his second over.

Al Amin Hossain goes for only two runs in his over.

LBW! The ball hits Hafeez on his thigh pad. The umpire thinks about it for a couple of seconds and then raises his finger. Hafeez is surprised. Mushrafe has asked the keeper to come up to the crease for that delivery. Replay shows the ball was going over the stumps by a good margin. Umar Akmal joins Sarfraz.

FOUR! Straight away Sarfraz goes for a sweep. Open his account with a boundary towards deep midwicket.

BOWLED! Goes for a sweep and misses the straighter one. The ball kept low and didn’t jump enough to meet Sharjeel’s bat. Sarfraz Ahmed has been sent in early by Afridi.

Left-arm spinner Arafat Sunny has been brought on to bowl with a leg slip for Sharjeel.

Taskin Ahmed continues into his second over. Starts with five dot balls to Hafeez. And Hafeez defends the last ball to convert it into a maiden.

SIX! On Sharjeel’s legs and he just flicks it over square leg. Finally he fires.

CAUGHT BEHIND! The short ball jumps onto Khurram as he edge it to the keeper. A very good ball but an equally disappointing response by Khurram. Muhammad Hafeez is in early.

Al-Amin Hossain is the second new ball bowler for Bangladesh.

Starts with five dots. Khurram beaten on two occasions by a wide-ish delivery on off side.

Shahid Afridi: We will bat first. Pitch looks different. We know where we are standing. Anwar Ali is in for Muhammad Nawaz.

Mushrafe Murtaza: We have a good match on, we want to win.

There is no grass on the pitch, so more runs and lesser swing and seam can be expected.

Pakistan and Bangladesh have faced each other in eight T20I and the former have seven victories and only one defeat to their name.