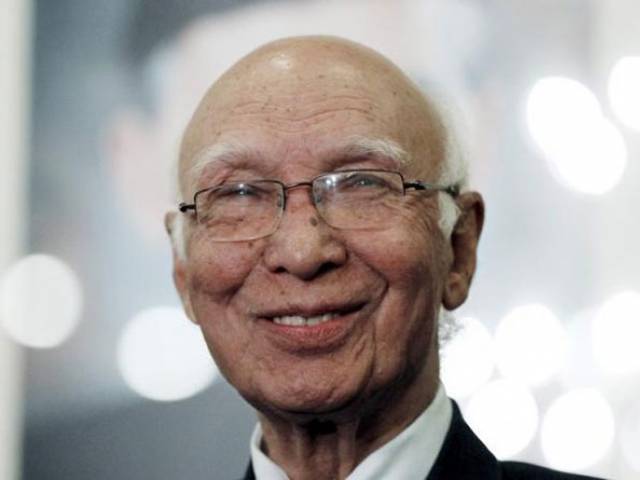 WASHINGTON: Pakistan should not be blamed for carrying out a “duplicitous policy” or for the problems of Afghanistan, a senior Pakistan official said on Monday at the start of talks in the United States.

US lawmakers have expressed concern about a possible sale of F-16 fighter jets to Pakistan because of its impact on relations with India and Pakistan’s policies in Afghanistan, but national security adviser Sartaj Aziz said the sale would help stability in the region.

Sale of F-16s to Pakistan is in America’s national interest: US

“We are blamed (for) pursuing a duplicitous policy,” Aziz said to reporters and US and Pakistani officials before the meetings in Washington began.

“Regrettably there is a tendency to blame Pakistan, in (a) somewhat simplistic fashion for most of the difficulties and challenges that engage Afghanistan,” Aziz said.

The US government announced on February 12 that it had approved the sale to Pakistan of up to eight additional F-16 fighter jets, and radar and other equipment in a deal valued at $699 million.

Senate Foreign Relations Committee Chairman Bob Corker told Secretary of State John Kerry in a letter that he was concerned about Pakistan’s ties to the Haqqani network, a militant group that US officials have said is behind attacks in Afghanistan.

US lawmakers have until March 12 to block the sale. Such action is rare since deals are usually well vetted before any formal notification, and it remained unclear if lawmakers would thwart the agreement.

Taliban toughen stance on peace talks ahead of quadrilateral meeting

Senator John McCain of Arizona, chairman of the Senate Armed Services Committee, urged the Senate Foreign Relations Committee to conduct a hearing on the possible sale.

Afghan government and Taliban representatives are expected to meet in Islamabad by the first week of March for their first direct talks since a previous round of the peace process broke down last year.

Pakistan is also taking measures to choke terrorist funding, and so far accounts worth a billion rupees have been frozen, Aziz said on Monday.

Speaking at the 6th Ministerial Review of Pak-US Strategic Dialogue Process in Washington DC, Aziz said Pakistan is determined to deny space to any terrorist group to plan and launch violent activities from its soil.

He said Pakistan has rendered huge sacrifices in the fight against terrorism, and the country’s resolve to finish and win this fight remains unshakable.

“Our strategy to eliminate terrorist networks and defeat their extremist ideology is all-encompassing,” said Aziz. Regarding priorities of the National Action Plan, the adviser said the government is taking all necessary measures to launch intelligence-based operations and choke the funding sources of terrorist organisations.

Further, Aziz proposed various elements that he said could be considered for charting out the way forward towards an enduring and multifaceted relationship between Pakistan and the US.

Meanwhile, Kerry hailed Sharmeen Obaid-Chinoy’s documentary on honour killings at the opening of the talks.