Troops from Malays­ia, Turkey, Egypt, Morocc­o, Jordan and Sudan as well as Pakist­an are among those partic­ipatin­g
By AFP
Published: February 29, 2016
Tweet Email 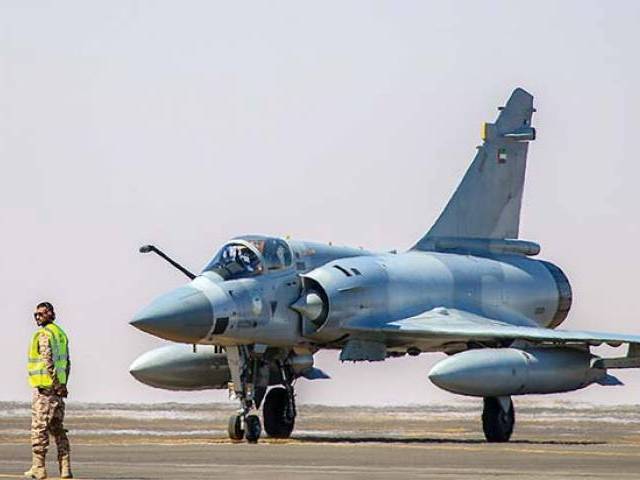 A Mirage 2000-9 of UAE air force prepares to take off during one of world’s biggest military exercises. PHOTO: COURTESY DIRA'A AL WATAN

RIYADH: Armed forces from 20 countries, including Pakistan, have begun manoeuvres in northeastern Saudi Arabia that the official Saudi Press Agency (SPA) described as one of the world’s biggest military exercises.

Troops from Malaysia, Turkey, Egypt, Morocco, Jordan and Sudan as well as Pakistan are among those participating in the ‘Thunder of the North’ exercise, which began on Saturday and involves ground, air and naval forces, SPA reported.

Forces from the other five Gulf Arab states are also taking part in “one of the world’s most important military exercises based on the number of forces participating and the area of territory used,” the news agency added.

It said a major goal of the exercise was to improve training in responding to the threat posed by terrorist groups.

Saudi Arabia has carried out air strikes against the Islamic State group in Syria as part of a US-led coalition fighting the jihadis.

Last December, it also formed a new 35-member alliance to fight terrorism in Muslim countries. Since last March, it has been leading a military campaign against Iran-backed rebels in Yemen.