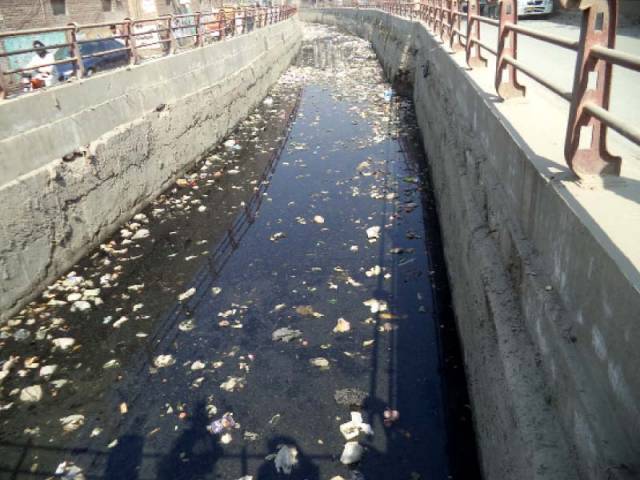 A nullah runs through Supply Road area in the city. PHOTO: EXPRESS

PESHAWAR: The canals running through the provincial capital have turned into garbage dumps – a cause for concern given the environmental and health concerns. Canals in Gulbahar, Faqirabad and Yakatoot are brimming with organic and solid waste.

Talking to The Express Tribune, Wahadat Khan, a resident of Supply Road area, said, “The canal in our area is filled with rubbish. The absence of garbage bins has forced residents to toss everything in the water.” He said food vendors who set up their stalls along the canal also throw their leftover produce and edible items. “The canal has become a dumping ground for rotten fruits and vegetables as well,” added Wahadat.

He pointed out since summer was just around the corner, he was worried the sludge-like canal would become a breeding ground for mosquitoes, flies and other insects. “Children living in the vicinity are not only susceptible to cholera, diarrhoea and other waterborne diseases, but also dengue now,” he said.

Wahadat suggested the provincial government should fine those found throwing waste into the canals in order to check pollution. “In cases where laws do exist, proper implementation should occur so [health and environmental] risks can be minimised,” he said.

It’s all a matter of planning

Abdullah Sadiq, another resident of Supply Road area, concurred and said, “The government should take the matter seriously and place garbage collection bins in the area to maintain cleanliness.”

He said places around the canal bear such a foul smell that no one can cross them without holding their breath. “The stink is unbearable and the diseases being spread are obviously worse,” Sadiq added.

However, Sadiq was not convinced waste collection points would solve the problem. “In the past even with bins, people used to throw their garbage everywhere, including the canals.  He added, “What is needed more is to educate people by launching awareness campaigns about the hazardous effects and impact of water pollution.”

Ball’s in your court

When contacted, Water and Sanitation Services Peshawar (WSSP) Media and Communications Manager Taimur Ahmad said, “Cleaning waste from canals does not fall into our domain.” He said this was the task of the irrigation department. Irrigation department executive engineer Asad Zamad said, “It is our responsibility to clean silt from canals; removing solid waste does not fall into our jurisdiction.” He added, “It is the duty of the WSSP.”