Philippines may ban pop singer Madonna for disrespect to flag

Philippines may ban pop singer Madonna for disrespect to flag

The singer and concer­t produc­ers could be held liable for violat­ion even if they were unawar­e of law, says offici­al
By Reuters
Published: February 26, 2016
Tweet Email 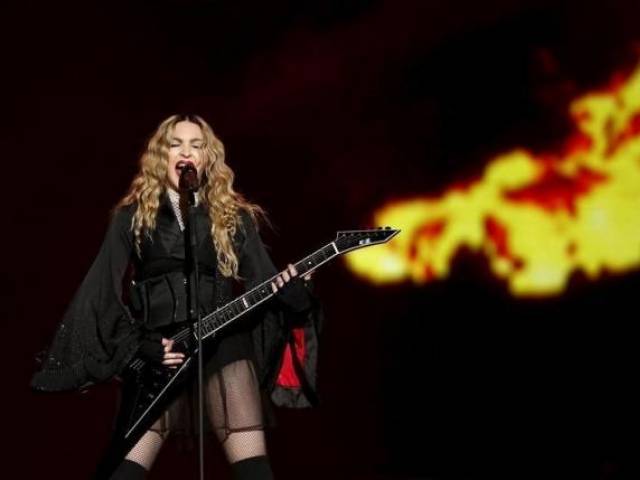 Madonna performs during her concert at the AccorHotels Arena in Paris. PHOTO: REUTERS

MANILA: American singer Madonna may face a ban in the Philippines for disrespecting its flag in her concerts this week in the capital Manila, a domestic broadcaster said on Friday, citing a historical commission official.

The 57-year-old entertainer is on a world tour to promote her “Rebel Heart” album, and did sold-out shows on Wednesday and Thursday.

“She ridiculed our flag,” the official, Teodoro Atienza, told radio station dzBB, adding that Madonna violated a law that prohibits the wearing of the Philippine flag “in whole, or in part, as a costume or uniform”.

The singer and concert producers could be held liable for the violation even if they were unaware of the law, said Atienza, who is chief of the heraldry section of the National Historical Commission of the Philippines.

“They may face deportation and might not be able to return to the country. She also allowed the flag to touch the stage floor, which is another violation.”

There was no immediate response from the organisers of the concerts, held in the same hall where Pope Francis met Philippine families last year. Madonna’s next stop will be in Singapore on Sunday.

A Roman Catholic bishop in the Philippines this week urged the faithful to boycott Madonna’s shows over her “suggestive” performance and “vulgar” clothes.

Roman Catholics make up about 80 per cent of a population of more than 100 million in the Philippines, where the church has strong influence, blocking legislation on the death penalty, divorce and same-sex marriage.