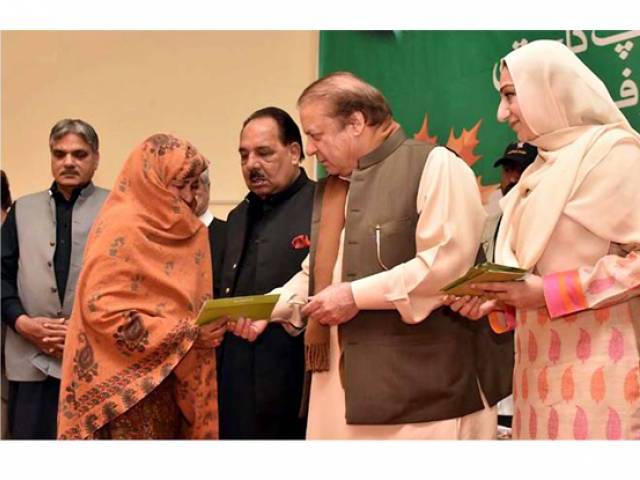 PM Nawaz gives Health Card to a deserving lady at the launch of National Health Programme in AJ&K. PHOTO: NNI

Barely a day after his arch-rival Imran Khan addressed a rally in Azad Jammu and Kashmir, Prime Minister Nawaz Sharif launched the National Health Programme in the AJK capital on Thursday with a pledge that his government’s aim is only to ensure public welfare.

Addressing the launch of the health programme in Muzaffarabad and Kotli at Mirwaiz Maulvi Muhammad Farooq Medical College, the prime minister said the scheme was like ‘a dream come true’ as provision of quality health care to those who cannot afford it, was part of his party’s manifesto.

“We believe politics is meant only to serve the masses, and we are doing it as a sacred duty,” the prime minister said, adding Muzaffarabad was the second district where the programme was launched to provide in-hospital services to around 82,000 underpriviledged beneficiaries.

He said the health insurance scheme was tailor-made for the downtrodden as he realised that a person could need up to Rs0.3 million for heart treatment and that he would end up getting poorer if he did not have enough resources.

“It is our endeavour to ensure that the people do not have to sell their household goods and even property to get medical treatment,” he said. “There is a need to invest more into this vital area so as to lessen the sufferings of the people.”

The prime minister said all those who received their health cards today would be able to avail the services from the same day. “The programme, initially implemented in 23 districts of Pakistan, will be extended to other areas in phases.  Work is also under way to expand the services in the entire AJK region,” he added.

Nawaz said a lot of work has been put in before the health insurance scheme saw the light of the day and was launched initially in Islamabad in December last year. “It is a major step forward towards providing free healthcare services, which covers liver transplant, diabetes treatment and other ailments,” he said.

The prime minister lauded all those involved in the scheme, particularly Maryum Nawaz and Minister for National Health Services Saira Afzal Tarrar and said he was pleased to note that in this public service endeavour all political parties like the PML-N and the PPP were standing together.

The AJK prime minister said the launch of National Health Programme in AJK was a milestone, which, he hoped, would benefit the masses.  He requested the Prime Minister Nawaz to extend the domain of the Health Programme to the areas along the Line of Control.

The scheme to be launched initially in two districts of AJK – Muzaffarabad and Kotli – will benefit 82,362 and 79,004 families, respectively.  The scheme is designed for poor families and provides free access to secondary as well as priority treatment of diseases.