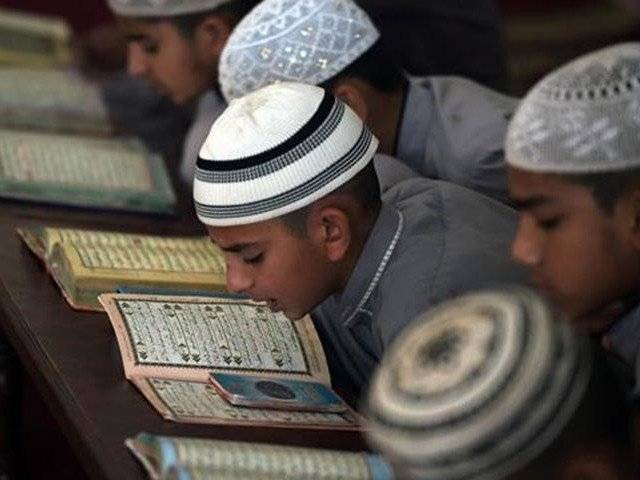 Mapping under way of seminaries for registration. PHOTO: AFP

ISLAMABAD: The government has shut down 254 suspected and unregistered madrassas across the country, the lower house of parliament was told on Wednesday.

One hundred sixty-seven suspected seminaries in Sindh, 13 in Khyber-Pakhtunkhwa, two in Punjab, and 72 unregistered madrassas in Sindh have been closed, Minister of State for Interior & Narcotics Control Balighur Rehman told the National Assembly in response to a query by Pakistan Peoples Party MNA Shahida Rehmani.

The minister shared the government’s measures to curb sectarian violence under the National Action Plan, their implementation and the results achieved until February 16. “The government is countering hate speech and banning dissemination of extremist material.”

So far 2,471 cases have been registered, 2,345 people arrested and 73 shops involved in the business sealed, Rehman told the house.

On misuse of loudspeakers, he said 9,945 cases had been registered, 10,177 people arrested and 2,664 devices confiscated.

This information prompted Shahida to ask about action against Lal Masjid cleric Abdul Aziz’s hate speeches, to which the minister said action had been taken in accordance with the law.

NA Deputy Speaker Javed Abbasi asked Rehman to hand over the FIR against Aziz to the PPP lawmaker.

Regarding registration and regulation of seminaries, the state minister said the government had completed 100% mapping on agreed parameters in Islamabad and Punjab.

Eighty per cent of the mapping exercise has been completed in Sindh, followed by 75% in K-P and 60% in Balochistan, he added.“There are 190 foreign-funded seminaries in the country, of which 147 are in Punjab, 30 in Balochistan, seven in K-P and six in Sindh.”

Rehman told the house that the Prevention of Electronic Crimes Bill 2015 was also being considered to strengthen the federal and provincial governments to effectively curb sectarian violence, extremism and propagation of hate material.

He said action had been initiated against authors, publishers and retailers circulating hate material. The government was also working on removing objectionable material from textbooks.

“Similarly, the PM’s Youth Loan Programme is targeting youth to tackle the menace of terrorism..”

The minister said NAP was being pursued through vigorous monitoring by the federal and provincial governments to eliminate sectarian violence in the country.