The propos­ed power plant will have two units of 660 MW that will genera­te power for local consum­ption
By Reuters
Published: February 22, 2016
Tweet Email 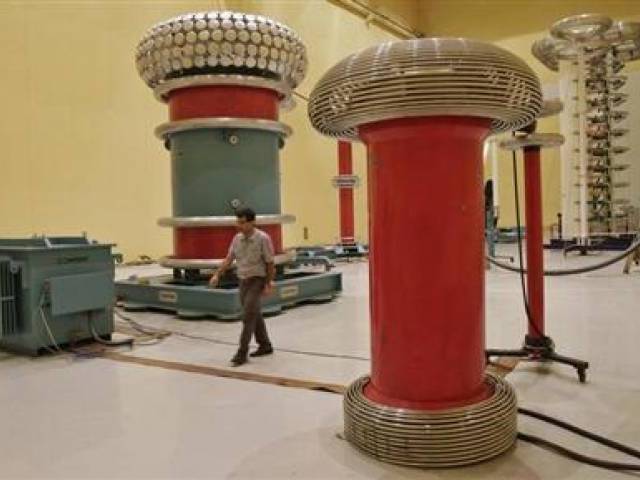 An employee walks inside the power cable testing laboratory for insulation at the Kei Industries, one of India's leading electrical equipment manufacturers at the industrial estate of Bhiwadi, in Rajasthan August 6, 2012. PHOTO: REUTERS

NEW DELHI/DHAKA: A state-run Indian firm is poised to seal a contract to build a $1.6 billion power plant in Bangladesh, beating out a Chinese competitor in the latest commercial tussle between the region’s two dominant powers.

After China’s recent success in pushing development projects in Sri Lanka, a breakthrough in Bangladesh would be welcome news for Indian officials who have long fretted over Beijing’s encroachment on to territory it considers its own back yard.

India believes Bangladesh is a part of a “String of Pearls” China is building across the Indian Ocean that stretches from Gwadar port in Pakistan to Djibouti on the African coast where it is building a naval base.

China’s Harbin Electric International Company Ltd, which has power projects in Iran, Turkey and Indonesia among others, lost the bid on technical grounds, said a Bangladesh official, speaking on condition of anonymity since he was not authorised to talk to journalists.

But Anwarul Azim, a spokesperson for the Bangladesh-India Friendship Power Company Limited, a joint venture set up to build the coal-fired plant, said BHEL was the lowest bidder.

The Indian government’s external lending arm, the Exim Bank, has backed up BHEL’s offer with nearly 70 percent funding of the project’s costs at a soft interest rate of around 1 percent above Libor, the leading global benchmark for pricing transactions, an Indian government official said.

He declined to be named, saying the two sides were about to seal the contract.

On Friday, Libor stood at 1.13 percent for a dollar loan for a year.

“Exim is very positive about it, very bullish about it and looking to taking this forward,” David Rasquinha, the bank’s deputy managing director, told Reuters of the Khulna project.

It would be the biggest foreign project by an Indian power firm, eclipsing a plant already built in Rwanda and a planned one in Sri Lanka.

Officials at China’s Harbin who dealt with the bid were not immediately available for comment.

But an employee in the after-sale service department said: “The company has been involved in many such tenders, it is very normal – either we win or lose the bids.”

India and China have stepped up bids for infrastructure projects in the region in recent years, with Prime Minister Narendra Modi pushing for a greater engagement with smaller neighbours after years of neglect.

The loss of the power project is the second setback for China, after Japan muscled into Bangladesh’s port sector last year, offering 80 percent financing on easy terms for a seaport, barely 25 km from a $8 billion deep water port that Beijing was negotiating to construct.

The proposed power plant will have two units of 660 MW that will generate power for local consumption. Nearly two-fifths of Bangladesh’s 160 million people do not have access to electricity, according to the World Bank.

The project, though, has raised environmental concerns, with activists warning that the movement of coal posed a threat to the nearby Sundarbans, the world’s largest mangrove forests.

They said the government had acquired the land and pressed on with the power station even before the environmental assessment was completed.

“This will have a devastating and irreversible impact on the Sundarbans, its ecology and biodiversity,” said Anu Mohammad, secretary of the National Committee to Protect Oil, Gas, Power, Port and Mineral Resources.

“We need power but not at the cost of Sundarbans.”

Bangladesh Finance Minister Abul Maal Abdul Muhith, however, told reporters recently that the necessary steps had been taken to reduce the impact on the environment.